Album Review: The Right Now – Gets Over You 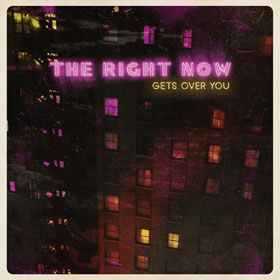 Everything old is new again, same as it ever was. Recent years have seen the rise of acts evoking the best of the Stax and Detroit soul sounds. Whether it’s Adele, Sharon Jones and the Dap-Kings, Fitz and the Tantrums, Mayer Hawthorne, Bruno Mars, The New Mastersounds or The City Champs – all very unique artists, each with their own sound – there’s a clear focus among these artists on bringing back the best of what’s come before in soul and funk.

Song-based music that makes the listener want to move: that’s the thing that all of these acts have in common. And there’s room for more artists. The latest of these is Chicago-based The Right Now. Fronted by vocalist Stefanie Berecz, the band crafts a sure-footed horn-charged soulful vibe across the eleven track on Gets Over You, their second full-length release.

The horn charts draw from the bluesy feel of Chicago’s North Halsted district as much as they look to the Memphis Horns, and there’s a bit of New Orleans thrown into the mix. Ace B3 work and that sort of Shaft-era work redolent of axemen like Dennis Coffey only adds to the classic feel. But The Right Now’s production aesthetic keeps the group from sounding too retro. Soulful, slinky ballads alternate with dance floor ravers. On “Can’t Keep Running” the band even folds a subtle reggae flavor into the proceedings.

Berecz’s assertive yet seemingly effortless vocals are front and center, and the seven-piece band provides stellar support. Special notice goes to the lyrical underpinning that the rhythm section – John Smilie on drums, Greg Nergaard on bass – provides throughout Gets Over You. On “He Used to Be” the band opens with a sweeping arrangement that calls to mind The Four Tops at their “Bernadette” best. Even when moving toward disco, they do so with subtlety that suggests an infinitely more soulful Steely Dan on “Call Girl.” The slow burn of “Higher” sounds like a hit, too. Nice Rhodes and flute work on “’Til it Went Wrong” evokes 70s Detroit soul in the best possible way. In sum, no weak tracks equals a tasty album.

However appealing The Right Now sounds on CD, there’s little doubt that onstage they’re even more exciting. As of this writing their web site (www.therightnow.com) lists but one live date; here’s hoping they latch onto a bigger name and tour nationally. Since the official street date for Gets Over You isn’t until April, I predict we’ll see some tour news before long. If they come anywhere close to me, I am so there.