DVD Review: Composing Outside the Beatles 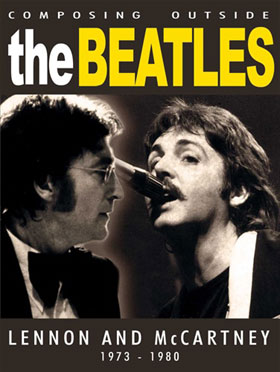 I have to admit it: as a music journalist/critic myself, I absolutely love this sort of thing. When it’s done well, a documentary such as Composing Outside the Beatles: Lennon and McCartney 1973-1980 can be the source of new-found wisdom about its subjects. And this documentary is done very well.

It’s conventional wisdom that John Lennon and Paul McCartney both produced their best work – together and individually – during their time in The Beatles. But their post-Beatles output is well deserving of merit as well. Even if one isn’t a fan of their seventies’ music, the sheer commercial success of it makes it worthy of another look. And that’s a big part of what Composing Outside the Beatles aims to do. By drawing upon the wisdom of rock writers, musicologists and those who were there, the documentary weaves a narrative of the 1970s that examines the quality of John and Paul’s music during that time.

Some of the conclusions drawn won’t surprise the viewer: Wings‘ debut Wild Life isn’t all that great; Band on the Run may be the best thing McCartney did post-Beatles; Double Fantasy is overrated in the wake of John’s senseless, tragic murder. But as the experts – and they really are experts here – delve into the music, they bring out some points that fans might have forgotten. Or, in a few cases, things we might have never considered.

Musicologist Chris Ingham is especially effective as he deconstructs some of John Lennon’s songwriting, showing the complexity – genius, really – in a mostly-forgotten tune off Mind Games called “One Day at a Time.” He applies the same you-ought-to-reconsider approach to McCarntey’s work, making the convincing argument that Paul’s particular and consistent genius is in arranging, more than songwriting. Ingham suggests that while a track like “Magneto and Titanium Man” off of Venus and Mars isn’t an enduring work melodically or lyrically, it’s a nearly flawless recording, with perfect touches applied to the arrangement.

The experts don’t always agree; sometimes one of them – say, journalist Peter Ames Carlin – might find value in an album that Johnny Rogan finds wanting – but this array of points of view only adds to the richness of Composing Outside the Beatles; it essentially says, “Here are some informed opinions; now you go listen again and decide for yourself.” All involved do, perhaps surprisingly, give props to “With a Little Luck” as a great song, and the kinetic bass line in Wings’ “Goodnight tonight” issingled out for well-deserved praise.

The musicians called upon to comment add quite a lot to the weight and perspective of Composing Outside the Beatles. Denny Laine, Klaus Voorman and drummer Denny Seiwell help put a personal perspective to what might otherwise merely be a parade of music journalists (if very good ones).

A number of clips are included, most notably sections of songs from the James Paul McCartney TV special and the Rockshow concert film. And a real rarity – of admittedly dubious value – is included: a piece of the audio from the session in which Lennon and McCartney got back together in Los Angeles. Circulating for years as part of the A Toot and Snore bootleg, this brief yet fascinating clip makes the point that – regardless what fans might have hoped – John and Paul weren’t likely to get back together to make new music anyway.

Composing Outside the Beatles wraps up by circling back to the sixties, reflecting on what it was that made the Lennon/McCartney partnership so special. It wasn’t merely that they wrote together (since after 1965 they rarely did), but that they served as fellow-genius foils for each other, each tempering the weaker instinct of the other, and implicitly encouraging each other toward their best work. The documentary makes the point that for John and Paul, a good bit of the early 70s was spent “finding themselves” as solo artists and as people in general. The result was some uneven musical output, but gems are scattered among even the least of their efforts.

Having grown up with this music – I bought pretty much every one of the albums mentioned upon release – I found Composing Outside the Beatles highly informative and enjoyable. It’s definitely recommended for fans of the Beatles, especially for those who haven’t give the post-Beatles solo work a close listen. For you, there’s lots of great music waiting to be discovered.