Album Review: The Well Wishers – Dreaming of the West Coast 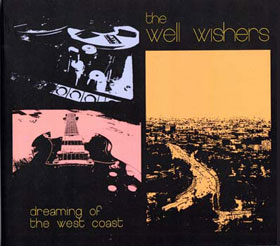 I play in a cover band. And I make no apologies for doing so: my thinking is, until I or a bandmate can write songs as good as the ones I enjoy on a daily basis, I’ll leave the songwriting to others. As I tell people, I don’t write music, I write about music.

And I believe there’s intrinsic value in a good cover band. Now, a tribute band is a different creature, one with a narrower brief: the goal of a tribute band is to copy exactly the sound of the original artist’s material. And sometimes, the look and aesthetic as well. Meanwhile, at their best, cover bands have a different goal: their mission is to play the songs that people will remember (or otherwise respond positively to), but they hold onto some of their own personality in the process. It’s a subtle thing, but a good cover band that plays Sweet‘s “Little Willy,” “The Banana Splits Theme” and Roxy Music‘s “Love is the Drug” can find – and display – the previously unheard connection between those disparate tunes. They do it by adding their own personalities into the mix.

When it comes to powerpop – one of my most treasured genres (or subgenres, if you like), the path is a tricky one as well. For artists intent on writing and performing their own original material, there are parallels with the cover band world. The powerpop band’s mission is to keep things within the style, but to avoid the pratfall of writing and playing the same song over and over again. The best powerpop bands can create songs that connect with the proud tradition of the genre, while highlighting their own unique personality in the process.

It only works occasionally. One of the tangential frustrations of Jordan Oakes‘ peerless Yellow Pills compilations was the experience of discovering a track by a heretofore-unknown artist, then tracking down more music by them, only to find that Oakes had found their very best tune: the others simply didn’t measure up. For every Tommy Keene and Vandalias, there are acts who – apparently – had only one good-to-great track in ’em.

The Well Wishers don’t have this problem; they fall decidedly into the successful end of their chosen genre. Dreaming of the West Coast is, I have learned, the fifth full-length release by this, er, group. But on record, at least, they’re not a group at all: in the proud tradition of Paul McCartney, Todd Rundgren and a select few others, The Well Wishers are (or is) Jeff Shelton. Though aided on most tracks by ace drummer Nick Laquintano (and a couple of one-off guest spots by others), Dreaming of the West Coast is the work of a single studio artist using a nom de rock.

I’ll say right now that the songs, singing, playing and arrangement on Dreaming of the West Coast are all fine, sturdy and catchy. But those qualities aren’t enough to make a powerpop album worth your hard-earned cash, because, let’s face it: those qualities are the baseline for powerpop. If the music isn’t up to those standards, well, we have plenty of other choices.

But with Dreaming of the West Coast, Shelton has crafted a sweepingly varied collection of songs that evoke the best the genre has to offer. There’s that thread of personality woven through the songs, but to their unending credit, The Well Wishers don’t settle in with a particular vibe. Shelton’s multi-tracked harmonies often suggest early Posies, and in fact his sweet/sour balance recalls Dear 23 in several places, most notably on “Truth is Coming Home.” But there’s a bit of Byrds-by-way-of-REM jangle imbued in many of the tracks as well (“Here Comes Love” is a fine example).

Chugging guitars that rock out in that Midwestern Cheap Trick/Material Issue way are in ample supply here. But there’s a delightfully unexpected psych/freakbeat vibe served up on a raving cover of The Smoke‘s “Have Some More Tea.” Not simply retreading the song, Shelton crosses it with a bit of guitar work that recalls The Open Mind‘s “Magic Potion” and some windmilling Pete Townshend riffage. It’s the rare powerpop act that mines Nuggets II: British Empire and Beyond for inspiration. It’s rarer still to find an act that doesn’t overdo it, making that influence just an important part of a balanced powerpop diet.

In whole, The Well Wishers are a band who have ingested the best nutrients from Big Star, Badfinger and the Raspberries, but who balance that influence with a more long-view perspective that takes in and synthesizes the best of what came before – and after – in the genre. The result is easily one of the best albums of its kind in recent memory. As Shelton says in a snippet of audio verité that ends “Mother Nature,” an instrumental raver that closes the album, “I think that’s a hit. Should we listen back?” The answer is a resounding, and repeated “Yes.”