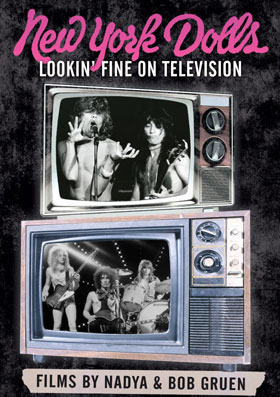 The title Lookin’ Fine on Television is something of a misnomer: the grainy, blurry, timeworn black-and-white film footage of the New York Dolls onstage (and off) never exactly looks good (in the strict sense of that word). But then, this is the New York Dolls we’re talking about, so conventional measures of good/bad do not necessarily apply. Arguably a slick, hi-def quick-cut full color document of the band (if such thing could exist) would do them a disservice, cleaning up their image to detrimental effect.

Lookin’ Fine on Television is fascinating time capsule that presents the band in its brief prime. With visual footage sourced from what looks to be no more than four or five live performances, filmmakers Bob Gruen and Nadya Beck have synthesized something greater than the sum of its parts. While footage from a particular show might have been a one-camera affair, through careful and precise editing, they have woven together what looks like a multi-camera shoot.

The audio is seemingly taken from a single show (or, at least the audio for each song is taken from a single performance). Perhaps surprisingly for a band as unpredictable onstage as the Dolls, vocalist David Johansen seems to have given a pretty consistent set of performances: regardless of the date or venue, when he’s singing a tune, Gruen and Beck are able to sync the video to the audio almost flawlessly.

The same can’t be said for that epitome of unpredictability, guitarist Johnny Thunders. Of course that was part of his skewed charm. When Thunders (born John Genzale) takes his sole lead vocal turn, there’s no knowing how he’ll phrase the lyrics. The filmmakers do their best, and that best is good enough. Thunders’ guitar work is equally imprecise, but is never less than powerful. It’s not what one might call incisive; rather, it’s a blunt instrument.

The footage captures the Dolls in all their seamy glory. Arthur “Killer” Kane is resplendent in his over-the-top glam outfit and ridiculously high heels. Johansen prances and preens as one would expect, and he’s always in full command of the onstage proceedings (well, to the extent that anyone could harness the chaos of the New York Dolls). Occasional flashes of Johansen sporting a hipster goatee are a real surprise, and the brief off-stage interview clips (mostly from Los Angeles) add to the ambience.

The brief bonus material is nearly worth the price of admission itself. An impromptu interview in front of CBGBs dates from the post-Dolls era, it features journalist Lisa Robinson speaking with Johansen and Thunders. Most fascinating is Thunders’ description of his band’s upcoming European tour with two new bands called Sex Pistols and The Damned. He also cracks wise about the possibility of having to change his band’s name to The Headbreakers in light of a new band (that’s been around “about six months”) called Tom Petty and the Heartbreakers.

Scuzzy video, bootleg-quality audio, and only one bonus clip; is Lookin’ Fine on Television worth it? Absolutely. Fans of the New York Dolls won’t want to miss this one.

You may also enjoy my 2008 interview with David Johansen.