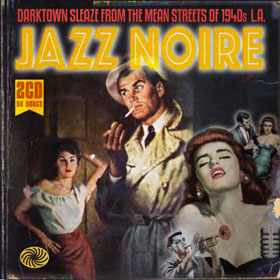 The folks at Fantastic Voyage (and sister label Future Noise) can be counted on to put together thought-provoking compilations. In the past they’ve collected obscurities from the Ember label, and brought together a clutch of songs that – in an effective bit of revisionist history – redefine what the word “punk” means. The label’s latest fray into compilations territory is Jazz Noire: Darktown Sleaze from the Mean Streets of L.A. This 2cd set collects fifty tracks from the 1940, and the result is a potted crash-course in the style.

Each of the two discs kicks off with a motion picture theme to set the mood: on the first disc it’s “Theme from The Killers,” and disc two starts with “Theme from High Sierra.” Both are successful at setting listeners up for what’s to come. The musical travelogue features Johnny Otis, Amos Milburn, Billie Holiday, T-Bone Walker, Wynonie Harris and other revered acts of the era.

The music on Jazz Noire isn’t merely of one style: there’s jump blues, swing, big-band, blues. What most of the tracks have in common is the evocation (to modern-day listeners) of juke joints where dancing, drinking and fighting occurred. “Skid Row Blues” by Jimmy Witherspoon with Jay McShann & His Orchestra is just the sort of why-haven’t-I-heard-this-before track listeners will discover on this set. There’s a nice balance between marquee names (Lionel Hampton, Cab Calloway) and lesser-known (but equally worth hearing) artists like Crown Prince Waterford.

Listening to the swaying instrumental “This Subdues My Passion,” the 21st century listener might not immediately realize they’re hearing Charles Mingus (billed here as Baron Mingus & His Octet). And Louis Jordan‘s original 1947 Decca recording of “Why’d You Do It, Babe?” makes one of its relatively rare appearances on CD. The same is true of a very early Nat King Cole side, “Gee, Baby, Ain’t I Good to You?” from 1944 (credited to the King Cole Trio).

Owing – one imagines – to licensing rules for the UK that are less stringent than what a US-based label would encounter, Jazz Noire cherry-picks the tunes to suit the project, rather than the other way ’round. Expertly programmed, the set feels like what you might have gotten by listening to a super-hip radio station in the late 40s (albeit without commercials, and in impressively high fidelity).

Special mention must be made of the liner notes. Written in that pulp-novel Mickey Spillane style, with subheading like “Dark Shadows Hauntin’ Me,” Dave Penny‘s noir-ish essay is spot-on and note-perfect, even if it has fuck-all to do with the music on the CDs. The vintage artwork and photos are ace, too. (Though it is a bit odd that while most of the comic book-style artwork portray white people, nearly all of the artists on the set are African-American.) And Fantastic Voyage easily one-ups its competitors’ shoddy packaging by (a) including track info that notes year of release and (b) packing the whole affair in a nice gatefold digpack.

Chances are — unless you’re a serious aficionado of 1940s pop-jazz – that you won’t have more than a handful of these sides in your collection. Allow Jazz Noire: Darktown Sleaze from the Mean Streets of L.A. to serve as a tidy entree into that world.