DVD Review: From Straight to Bizarre 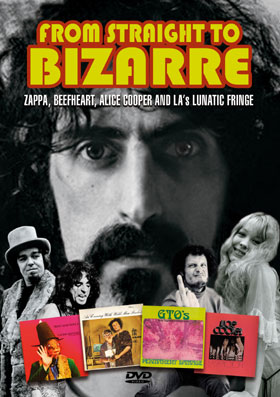 A new DVD from Sexy Intellectual – the outfit responsible for informative and incisive docu-DVDs on Brian Eno and many other influential figures in music – takes an in-depth look at the record labels Bizarre and Straight. Started by Frank Zappa and his business partner Herb Cohen, these labels sought initially to document the “freak” scene in Los Angeles. Though not commercially successful by most measures, Straight and Bizarre nonetheless were successful in their basic aim.

Next up is the saga of Zappa’s discovery and singing of Larry “Wildman” Fischer, the infamous Sunset Strip song-for-a-dime paranoid schizophrenic. The most famous of all groupies, Pamela Des Barres weighs in extensively on her group The GTOs.

After signing those two right-off-the-street acts, Zappa worked a deal with his old friend/nemesis Don Van Vliet a.k.a. Captain Beefheart. His eventual Straight release Trout Mask Replica would be the most celebrated release on the label (save Zappa’s own output). The troubling saga of Beefheart’s group and the recording of the album is covered in great detail, aided by the onscreen recollections of John French (“Drumbo”) and Bill Harkleroad (“Zoot Horn Rollo”).

Straight’s next signing was – in retrospect – its most mainstream, but in the late 60s nobody thought of the group Alice Cooper (originally The Nazz) as mainstream. Original members Dennis Dunaway and Neal Smith have a lot to say about their time on the label, and every word of it is interesting.

While Jeff Simmons‘ group Easy Chair fell apart (due in large part to the label’s neglectful inattention) before they recorded, Simmons himself would record a biker exploitation film soundtrack (Naked Aangels) and then a solo album, one of the few Straight/Bizarre projects in which Zappa himself took an active role.

Actually Zappa did start out a number of projects: he was the original producer of Hurvitz’s album, but left due to a falling out (discussed in the film). He bailed on Fischer after an incident at the Zappa home, he quit the sessions for the GTOs album after an argument, and he gave up during sessions for Alice Cooper’s Pretties for You album. In most of these cases, Zappa handed the reins over to another producer (Ian Underwood, in two instances) who seemingly took less interest in the sessions than had Zappa himself.

A number of Straight/Bizarre releases were either licensing of previously-recorded material, or were handled by Cohen with little or no Zappa involvement. Records from Lord Buckley, a posthumous Lenny Bruce, Tim Buckley, and Jerry Yester all came out on Zappa’s label. Straight’s final signing was the doo-wop group The Persuasions; the tale of how they were signed by Zappa is one of From Straight to Bizarre‘s most endearingly funny moments.

The label’s waning years did include releases from Alice Cooper, as that group found their footing and took off commercially . The DVD explains how Zappa’s preoccupation with his own career led to his decreasing involvement with – and interest in – shepherding the careers of the outsider artists on his label. But From Straight to Bizarre‘s cast of pundits makes a good case for the argument that Straight/Bizarre was similar in its goals to Brian Eno‘s Obscure label, and The Beatles‘ ill-fated Zapple Records (itself a subsidiary of their Apple label).

At two and half hours, one might fear that From Straight to Bizarre is overly long. That’s most certainly not the case: the time flies by. The DVD’s pacing is excellent: clearly the producers storyboarded the film carefully, as just enough time is given to lesser efforts, allowing more screen time to discuss Beefheart’s and Alice Cooper’s albums. The film is richly full of interviews form the people who were actually there, enhanced by the commentary of several pop music scholars. For anyone interested in Zappa, any of the artists on his label, or the freaky underside of late-sixties pop culture, From Straight to Bizarre is two and a half hours well-spent.