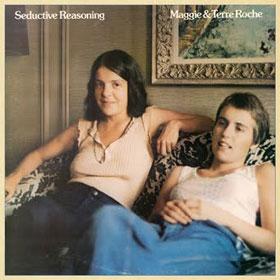 Since my discovery of their music, The Roches have long been a sentimental favorite for me. Having grown up on a steady diet of pop and rock, I didn’t take notice of the three sisters (Maggie, Terre and Suzzy) when they got their recorded start as a trio. Like, I suspect, many rock fans who eventually got into their music, I first learned of them through their connection to King Crimson‘s Robert Fripp. During one of Fripp’s many hiatuses from King Crimson, he sought to work as an “intelligent mobile unit” (or some similar Frippism). He made a point of working with many artists outside the whole progressive rock milieu, and the Roches’ self-titled debut album was one of these. As the three sisters showed off a dazzling display of their vocal work, incisive lyrics and fine folk-style playing, Fripp’s thickly sustained electric guitar wove in and out of the mix. It was a strange pairing, but it worked.

After picking up that 1979 album, I was hooked. Even though subsequent albums didn’t feature Fripp, the sheer quality of The Roches’ songs – and their quirky delivery – endeared them to me. (That my toddling daughter used to dance around the living room to their album Another World helps a bit, too.) I got the chance to see them onstage a couple of times, and had the dubious honor of receiving a sort of cease-and-desist email from Suzzy Roche when she learned I was planning to write a piece for my “Bootleg Bin” column covering an unreleased live recording of the group. (Apparently they share Fripp’s famous disdain of fan recordings.)

One of the records I picked up back in the 80s was a pre-Roches album credited to Maggie and Terre Roche (Suzzy, as Roches fans will doubtless know, was away in Hammond, Louisiana during the period this album was cut). Every bit as good as the subsequent Roches albums with Suzzy, 1975’s Seductive Reasoning applied a slightly more commercial sheen to the sisters’ music. Though clearly a Maggie/Terre project, the album features the unmistakeable sonic imprints of the other parties involved. Namely, producer (of some but not all tracks) Paul Simon, and the Muscle Shoals Rhythm Section. Both make their presence felt in a sympathetic, not-overpowering manner. 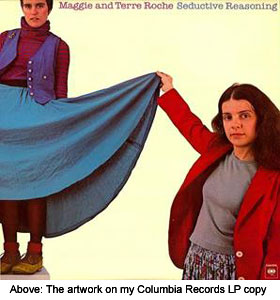 The songs – like nearly all of the sisters’ subsequent work – deftly mix humor, pathos, tragedy, playfulness, and sexiness into a pleasing stew. Highlights abound, but the Carole King-ish “Underneath the Moon” is certainly near the top. The chugging “If You Empty Out All Your Pockets You Could Not Make The Change” is a hoot, and “Telephone Bill,” with Terre’s clear-as-a-bell upper register, is heartbreakingly stark. But for me Seductive Reasoning‘s finest moments are on “The Mountain People,” an autobiographical country-and-western pastiche that shows the sisters’ unerring, note-perfect feel for American musical forms. Bonus points for some very clever rhyming.

A 2012 Real Gone Music reissue of the Columbia album doesn’t add any bonus tracks, but it does include a contemporary essay from Maggie. It also features what they’re calling the “original” cover artwork. (I like the Columbia one a whole lot more.) While I’m a fan of all Roches work (at least up through 1992’s A Dove, after which things get spotty), thanks to its perfect balance of quirk and commercial sensibility, Seductive Reasoning has aged the best. Highly recommended.