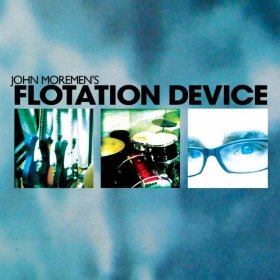 Not being any sort of sport fan, I generally don’t go in for sports metaphors in my writing. But occasionally, there’s no better way to make a point. So here goes:

I should explain, of course. I’ve written fairly extensively about releases on the Bay Area-based label. And while the acts I’ve covered feature a fair amount of overlap in terms of personnel, they generally have one thing in common: placing of high value on the idea of “ear candy.” Whether it’s The Orange Peels or William Cleere (or a bunch of others), the music has its own identity, yet remains steadfastly true to some basic ideas as to what pop music should sound like.

But here’s the thing: one of the players whose name shows up in the liner notes of many an MLM release – John Moremen – has a solo album of his own called John Moremen’s Flotation Device. And this one-man project – Moremen on guitar, bass and drums – sounds not a bit like any other MLM release. So much for thinking I know what to expect from Mystery Lawn.

Where other MLM artists draw inspiration from (among many other sources) 70s AM pop radio, on JMFD, Moremen channels his inner Duane Eddy. And perhaps a bit of his latent Daddy-O Grande; the fifteen rocking instrumental tunes on the disc owe more to the twangy Fender stylings of early 60s surf rock, with an updated, modern sensibility.

Instrumental rock of this stripe is a challenging genre. The artist who chooses that path limits the tools at his or her disposal. Keyboards are rare, as are any instruments beyond the guitar/bass/drums trio. There is no lead vocal line to move the melody along, nor to convey the song’s vibe. And since for the most part the rhythm section is there to hold down the bottom, it’s mostly down to the six-string fretwork to make whatever musical points need making. In short, in the hands of a less-than-highly skilled practitioner, the instro-rock path is fraught with peril, and the results are quite often uninspired at best, disastrously monotonous at worst.

But guess what: John Moremen’s Flotation Device deftly glides past all of those musical harbor mines, creating a textured, rocking and tuneful collection. There’s an intimate feel to the tracks that suggests the well-oiled machine of a rock trio cutting the tracks live-to-tape. Clearly that didn’t happen, what with Moremen playing everything.

Some of the tracks are truly thrilling: “Deep Fried” is one of these. With a busy (in a good way) rhythm section, it’s an exemplar of Flotation Device‘s strengths, and illustrates the point that instrumental trio rock need not limit itself to surf-rock styles. The fret-buzzing tracks have subtle flourishes of (shudder!) progressive rock, but with none of that genre’s look-ma pyrotechnics. With very few exceptions, the tracks on John Moremen’s Flotation Device whizz by: they stake out their riffage, entertain for a few minutes, and then it’s on to another winning cut. It’s all over too soon.

By the way: It will be interesting to see what Moremen’s other project will sound like. For months now I’ve been hearing rumors about a project of his called The John and Paul Paul and John, a collaboration with musician and noted music journalist (and supreme master of the clever Tweet) Paul Myers.