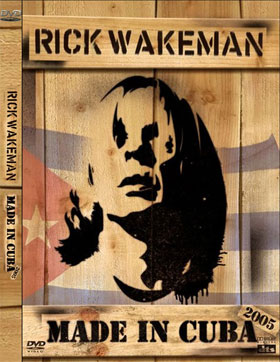 Rick Wakeman has quite a reputation. Both as a man and a musician, he’s cut a rather indelible figure since his ascendancy on the music scene in the early 1970s. While the classically-trained keyboardist got his start as a session keyboardist, working on albums by David Bowie and many others, he headed down the household-name path when he quit British folk-rockers The Strawbs to join Yes.

And it’s within the context of Yes that most people know of Wakeman. Within that group, he became renowned (or notorious) for several things. First and foremost, of course, was his playing: fast, nimble, and endlessly inventive, Wakeman was always interested in the texture of sounds. That means that – unlike his (nonetheless underrated) predecessor Tony Kaye, Wakeman was always up for trying the Next Big Thing in terms of keyboard technology. And the ’70s were a fine time to have that attitude: analog synthesizers were still fresh and new, with possibilities unexplored.

Wakeman was just the man for that sort of thing. Onstage he cut an imposing figure, resplendent in long blond hair and fluttery, glittery capes. Over the top? Certainly, but that was part of the point, after all. And because things we take for granted now – samples, presets and the ability to store sound configurations – didn’t exist in the 70s, he was always surrounded by mountainous banks of keyboards. They were needed to put the sounds at his fingertips; we couldn’t very well have the audience sit there for five minutes between songs whilst he reprogrammed the oscillators on his MiniMoog, now, could we?

Offstage, Wakeman’s notoriety for individualism was nearly as well-known. While it’s easy (and relatively accurate) to imagine most members of Yes spending their offstage time meditating, visiting a remote shrine, or composing an opus in a garret somewhere, Wakeman was more likely off at a local pub, endlessly carousing, throwing darts, elbows and jokes, and eating a big ol’ turkey leg or somesuch. Bigger than life, he worked hard and played harder.

It took its toll, of course. Wakeman had his first serious medical run-in very early on, with the first of several heart attacks when he was merely 25. And though a very serious musician, for Wakeman it’s often been equally as much about having fun: when the fun stopped or was found elusive, Wakeman split. In fact he quit and rejoined Yes no less than five times. (At the time of this writing, he’s not in Yes, though one of his keyboard-playing sons was, and another nearly was.)

Wakeman’s solo recording career began with 1973’s The Six Wives of Henry VII. Though he’s since released something like one hundred-plus albums – no, really – the timeless Six Wives remains his most compelling work. He ventured into multimedia early on as well: his 1975 album The Myths and Legends of King Arthur and the Knights of the Round Table was made into an ice spectacular. Again: no, really.

Wakeman continues to tour with his own band, sometimes in tandem with another (currently-former-but-who-knows) Yes member, his close friend Jon Anderson. In April 2005, Wakeman and his band played an acclaimed concert series in Havana Cuba, and the show was filmed. The DVD of that performance, Made in Cuba, shows a slightly odd collection of songs, mostly centering around Wakeman’s 70s work (that part makes sense) but also including – no, showcasing – “Starship Trooper”/ “Wurm” from Yes’ early 70s catalog.

The problem isn’t with Wakeman’s playing. Behind the keyboards (smaller banks of ’em these days, though enough to give the right visual effect) he’s still an ace. And he still wears a glittery cape (note to self: I must get one of those). And the band – made mostly of relative unknowns – is adept enough at paying the sometimes-intricate material. No, the problem is the vocalist. One Ashley Holt, the singer simply isn’t up to task to cover Jon Anderson’s parts (fair enough: few are), and he’s not all that splendid on the other vocal material, either. Though Holt’s associating with Wakeman goes back ages – they were both members of a band called Warhorse, and Holt sang on Wakeman’s Journey to the Centre of the Earth – his voice just doesn’t seem to fit with the music. Holt’s slightly raspy pipes seem more suited to meat-n-potatoes rock, not relatively effete prog rock. In the end, his voice is a distraction at best, and unpleasant at worst. Thankfully, large chunks of the performance are instrumental, but then there’s the problem of what to give Holt to do.

All that said, Holt’s shortcoming are worth overlooking so that the show as a whole can be enjoyed. The sound and audio production values are very good, the performance is tight, and the historic nature of the show itself – a rare officially-sanctioned rock concert in Cuba – makes it notable. And Rick Wakeman’s fun-loving attitude and approach to playing and performance shines through, especially when he takes a mobile keyboard into the crowd, and then plays a solo with he help of a lovely female audience member. That’s the over-the top Wakeman that prog fans know and love.