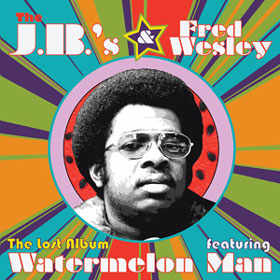 File this one under Great Lost Albums of the 70s. As the story goes, the tracks that make up The Lost Album Featuring “Watermelon Man” were recorded by James Brown‘s trombonist Fred Wesley, with The JBs backing him, and intended for an album that never materialized. As you would quite rightly imagine, the arrangements are tight as a tick, and (for the most part) funky in the extreme.

Tracks like “Watermelon Man” and “J.B. Shout” are brimming with energy and good vibes. “Use Me” has an Isaac Hayes funk feel; it would have worked nicely on the soundtrack of any number of blaxploitation films. “Funky & Some” has some tasty guitar work, punctuated by righteous horn charts and a jazzy solo from Wesley.

When the mood is dialed down, it’s less effective. An ill-advised cover of Gilbert O’Sullivan‘s hopelessly maudlin “Alone Again (Naturally)” evokes the feel of being trapped in an elevator in 1975. But most of the covers work: “Back Stabbers” is a complete – and wholly successful – reinvention of the O’Jays‘ hit. And “Everybody Plays the Fool” keeps the flute chart from The Main Ingredient‘s original, adding some tasty female vocal ensemble work – and Wesley’s horns – to the showy, varied arrangement.

“Get on the Good Foot” is every bit as exciting as it ought to be; the players are firing on all cylinders. The bass work is especially note-perfect. “Secret Love” is straight big-band jazz, showing that Wesley could have taken the band in a Vegas direction and found great success. Not a drop of funk in it, “Secret Love” showcases the expertness of Wesley and the JBs as players. “Seulb” is another wonder, swinging in a big way, aiming for – and hitting – the sweet spot between BB King and Stevie Wonder. “You’ve Got a Friend” answers the question: What would the Carole King song sound like, arranged as an instrumental by Billy May or Neil Hefti? Damn good, that’s how.

The softer jazz mood of “Sweet Loneliness” shows that Wesley and the band could in fact be highly emotive on such numbers; it’s a romantic piece with understated Rhodes work throughout. With its evocative-of-Isaac-Hayes title, “Transmograpification” is another effective instrumental that begs for a movie; the track’s combination of synthesizer and horns works seamlessly.

Sporting only one weak track out of thirteen, The Lost Album Featuring “Watermelon Man” is highly recommended to jazz, soul, funk, swing, blues and r&b fans. Others may well dig it too.