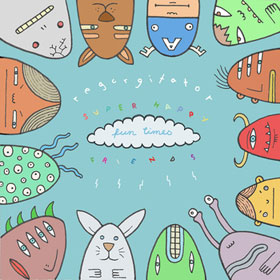 I know people – I won’t name ’em – who, for one reason or another, prefer their music in random fashion. They’re not the sort to be swayed by the “our music is designed to be listened to in a certain order, start to finish” argument. They find the sameness of an artist’s work to be (at least) boring and (at worst) repellent. At the other end of the spectrum are listeners such as myself, children of the Album Era. We listen to both sides (ha) of the album, all the way through.

Great news: from faraway Australia comes Super Happy Fun Times Friends from Regurgitator. Other than the common thread of Quan Yeomans‘ lead vocal, the only consistent characteristic is a high level of quality in the writing and playing. Other than that, each of the album’s fourteen tracks sounds as if it’s the work of a band unconnected to the other thirteen.

And since humor is a component of Super Happy Fun Times Friends, it’s fair to consider the album as a sort of The Turtles Present the Battle of the Bands for the 21st century. Though perhaps not the band’s intent, there are parallels. Not a stiff exercise in how-many-different-styles-can-we-cover, Super Happy Fun Times Friends is instead merely a survey of where the (aptly-named) band’s collective head is. They ingest a bunch of different styles, chew ’em up and cheekily spit them back at the listener.

“One Day” weds a drummer-in-a-box with nervy, punky guitar work, and fold in some really throaty bass work. Imagine The Vapors as an arena-rock band and you’ll have some idea of the track’s vibe. The very brief “Game Over Dude” is video arcade-meets Dead Kennedys. But the, um, sensitive ballad “All Fake Everything” serves elegiac piano and strings as the backing for this lyric: “Sometimes it’s hard to be a rapper…sometimes it sucks to be a famous dude.” And just when you settle in to the arrangement, well, something happens. Suffice to say the vocalist rhymes “abortion” with “distortion” and throws lots of f-bombs. It’s a hysterical hijack.

“Super Happy Funtime” is a folky gem with parodic lyrics reminiscent of Flight of the Conchords‘ (officially unreleased) “Albi the Racist Dragon.” The music is played straight, creating the perfect balance. “Punk Mum” proves that there’s actually a sonic connection between Shonen Knife and Bo Diddley. Eighties chunka-chunka guitar is the centerpiece of the verses in “Be Still My Noisy Mind.” With its chiming refrain, it sounds like a hit; even the slightly strange instrumental break in the middle somehow works in the context.

“D.M.T. 4 2” is an instrumental synthesizer piece that avoids being twee; it’s fun, rocking and slightly ominous, especially when the ultra-distorted guitar blasts kick in. On the giddily anti-religious “No Show,” Regurgitator channels their inner Fountains of Wayne: it’s a powerpop gem of the first order. The drum fills are especially impressive, and the skronky stop-start guitar blasts are a delight. “Contactable” is adrenaline-charged Replacements-meets-70s-rock, with a bizarre interlude that’s beyond description.

But then “Into the Night” takes the piss out of the likes of Depeche Mode, ABC and Ultravox. Yet Regurgitator does so in a way that suggests a real love for the style; it’s equal parts pastiche and love letter to a bygone era. It happens to be a really catchy song. The hypnotic “Devil Spell” is tough to classify other than to say that it, too, sounds like nothing else on Super Happy Fun Times Friends.

The kinetic and swaggering “Born Dumb” is a fist-pumping, head-nodding, riff-rocking good time. “Outer Space” sounds like a long- (and unjustly) forgotten hit from 1983, and features some nice use of analog synthesizers near its end. The disc ends with the brief, Tom Waits-ish “8pm,” a song seemingly custom-made to end the album: it carries that late-night, bar-stools-upended-on-tables aesthetic.

Bratty, clever, snide, funny, rocking, taut…Super Happy Fun Times Friends is all of these and more. A winner, it’s breathtaking in its successful synthesis of disparate styles. And it’s a helluva fun listen as well.