Album Review: An American Underdog – Always on the Run 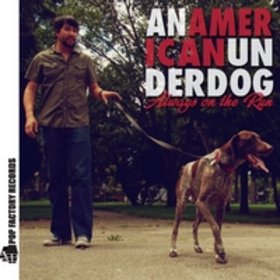 To the degree that such inherently qualitative things can be quantified, a key determinant between good and great pop is what the songwriter/performer does beyond the verses and chorus. Yes, a rousing, ringing, memorable chorus is an essential ingredient, and the verses give body and structure to the songs. But sometimes a songwriter – at least one of high merit – can get away with very little in the way of those basic items if the “extras” are especially good. Think of The Raspberries‘ “I Wanna Be With you.” One line of verse, and onto the glorious chorus.

This argument – about those extras – came rushing back to me in the first few seconds of listening to the album Always on the Run by An American Underdog. The opening track, “Your Reign is Over” virtually bursts out of the speakers, daring the listener to not be wholly enveloped by its sweeping sound. A split-second of guitar chord, followed by a cymbal crash, and then it’s into a soaring, wordless intro. And then the song proper starts. It’s quite good, too, full of close vocal harmonies, punchy power chording, hand claps and the like. But that wordless bridge, or (as the Beatles called it) middle-eight: that’s what makes the song more than just very good.

A brilliant sense of dynamics, an understanding that simply lining up some chords and slapping some lyrics on ’em: those are the sort of details that make for an enduringly successful record. And this approach is applied throughout Always on the Run. An American Underdog is Andy Reed, also of The Verve Pipe, with assistance on some tracks (synth, drums, horns and whatnot).

Though it might seem an odd point of reference for a song about the Pacific Northwest, the vaguely Latin ambience of “Portland” is highly reminiscent of Fastball‘s “The Way.” The subtle, lilting “Beautiful Dreamer” (not the theme song from 70s sitcom Rhoda) evokes Michael Penn and his penchant for using Chamberlin and Mellotron to good effect. The album’s title track weds a soft-shoe intro to a Sixties pop feel; the result is a subtler take on the kind of thing Jellyfish did in the 90s. And again, the middle-eight takes things to another level, in the same manner as Texas popper Lannie Flowers does so ably.

“The Day the World Was Lost” has a loping, summery, acoustic feel a bit like early Crowded House. And somehow Reed breathes new life into a line like “…my name…don’t wear it out.” A sprightly violin solo is unexpected, but once it starts, you’ll wonder how the song could have lived without it. On “Nothing I Can Do” Reed channels the bubblegum-coated ghost of Marc Bolan. “I’ll Miss You Girl” has all of the elements of a timeless pop song as well, and blends them effectively. The track’s chord structure is positively Beatlesque. It does, however, sound very much like “Little Wild One” by the fictitious band The Wonders in Tom Hanks‘ That Thing You Do!

Reed’s creamy harmonies on “Parades” show that he can effectively craft a soft, romantic number as well as the more upbeat stuff. The intro of “Train” sounds straight out of Pet Sounds, but the countrified song itself is a ¾ folky campfire-styled number. It’s not in keeping with the general style of Always on the Run, but it’s a fine way to end a fine album.