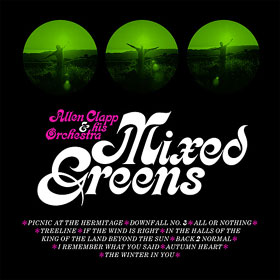 You know that old saying: “If you want something done, ask a busy person to do it.” Or something like that. By all available evidence, this axiom holds true in creative matters as well, at least when the subject is connected to Mystery Lawn Music. I’ve covered a number of MLM-related releases over the last few years: The Orange Peels‘ 2020; The Fairwood Singers; Agony Aunts, William Cleere + the Marvelous Fellas. All of these bands/projects/whatevers have one thing in common: some degree – often a high one – of involvement by Allen Clapp.

So, based on that information alone, it’s clear that Clapp’s a busy guy. But wait: I’m pretty certain he also has a day job. Indie heroes of the underground pop variety can’t support a lavish lifestyle on music revenues (that’s a subtle hint: Buy. Their. Albums.) so day-job it often is.

Against that backdrop – and with the safe assumption that more stuff is always in the works over at Mystery Lawn – it’s delightful news to discover yet another release from the multi-talented Mr. Clapp. The latest is Mixed Greens, credited to Allen Clapp & His Orchestra.

Mixed Greens certainly shares some sonic similarities with other Mystery Lawn releases; how could it not be so? From my point of view (or, more properly, hearing) that’s a very, very good thing. The liner notes – part of the reliably lovely package design – don’t quite spell out all of the who-does-what details, but many of the Mystery Lawn usual suspects – or as I recently called them, a Wrecking Crew in miniature – are name-checked. Still, this one is Clapp’s show, first and foremost.

The majestic ¾ lilt of “Picnic at the Hermitage” sets the album’s tone. This instrumental track betrays hnts of XTC influence, and Magical Mystery Tour era Beatles, but it’s pop, not sike. “Downfall No. 3” is reminiscent of Clapp’s Orange Peels work, albeit with more of a Left Banke bent. Name-checking Carole King and Chrissie Hynde gives the listener additional cues to where Clapp’s coming from; so too do his wide-panned “la la las.” The soaring “All or Nothing” is redolent of the best AM radio pop of the 70s, but Clapp’s use of electronic percussion imbues it with a (relatively) more modern vibe.

Though most of the song on Mixed Greens are built around piano, “Treeline” centers around acoustic guitar, at least initially. Its highlight is Clapp’s clear and impeccably multitracked harmony vocal work. Bonus points for some twangy, reverbed (albeit tantalizingly brief) lead guitar – and sympathetic bass work — both highly evocative of Pet Sounds.

Clapp’s vocals carry the strong, memorable melody of “If the Wind is Right.” A second instrumental, “In the Halls of the King of the Land Beyond the Sun” has the loosest, most “live” vibe of all Mixed Greens tracks, and it also veers the closest to rock’n’roll. The plaintive, melancholy “Back 2 Normal” is another exemplar of classic songwriting and arrangement; though most of Clapp’s compositions tend toward the upbeat, he’s clearly an expert at capturing pathos and other finely-shaded “adult” emotions in a way that’s very appealing and resonant. The occasional “Woo hoo hoo” helps with that.

“I Remember What You Said” employs guitar again; this time it’s of the delicately picked electric variety. Subtle use of several keyboard textures adds a lot to the song. “Autumn Heart” employs a piano with a very “upright apartment grand” texture, and is vaguely reminiscent of (very early) Elton John. The no-duds track list wraps up Mixed Greens with “The Winter in You.” It’s perhaps the album’s most subtle track, taking its sweet time to unfold, and drawing the listener in all the while. Like all of the tracks on the album, it delivers the vibe of baroque pop without the filigree normally associated with that style.

Special recognition is due to liner notes author Jud Cost for channeling Ralph Gleason in his essay. He provides some context, tells a story, and entertains; the brief piece fits hand-in-glove with the music and overall packaging. I hear it’s soon to be on vinyl, too!

If you’re looking for a rocking good time, turn your attention elsewhere (toward, say, The Orange Peels’ 2020). But if your tastes and appetite run toward impeccably crafted pop, Mixed Greens should be on your platter.