Album Review: Yes – In the Present: Live in Lyon 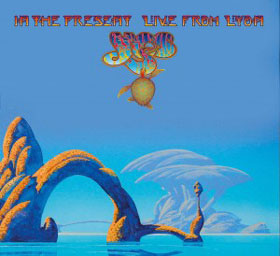 In some ways, Yes can be said to have ushered in the live album era of the 1970s. At the height of their fame, the group released Yessongs, a lavish 3LP set documenting their impressive and varied stage show. Excessive? Perhaps, a bit. But then this is progressive rock we’re talking about, so conventional notions about the limits of good taste do not necessarily apply. And in fact Yessongs – released in 1973 – was and is a pretty fantastic live album: the sound quality was good by early 70s standards. Moreover, if you weren’t lucky enough to see the group onstage, Yessongs served as a reasonable facsimile in those pre-VHS days (and in fact the film version of Yessongs – released in 1975 – would become a staple of midnight-moviegoing). Even if you did see Yes live, Yessongs made a pretty fine post-show souvenir.

To be sure, there have been subsequent live album from Yes in the ensuing decades. And few of them equaled the grandeur of Yessongs. The live 1980s Yesshows has its moments, but was mostly a cash-in by the label attempting to recapture the group’s confused fans, many of whom had gone a bit wayward when Drama came out. (Me, I love Drama. More on that forthwith.)

9012Live, though, was a real stinker. This 1984 LP too was sort of a tour souvenir – documenting the commercial juggernaut live tour supporting 90125 (natch). But it was short on actual songs, and the sound was a bit thin. The Keys to Ascension albums (1996 and 1997) offered up a mix of live and studio material a la Pink Floyd‘s Ummagumma, and while these albums have their ardent defenders, the fan base for the group itself was nearing its lowest point ever.

What all of those albums did have, however, was Jon Anderson. The Yes vocalist had come and (most notably during the Drama days) gone, but when it came to live releases, Anderson was always on board. As was bassist Chris Squire, Yes’ sole member to have appeared on every record, played at every show.

Fast (or slow) forward to 2011 and the release of In the Present: Live in Lyon. The lineup for Yes is both familiar and new: Squire on bass, Alan White on drums, Steve Howe with his distinctive guitar style. On keyboards we have not Tony Kaye, not Rick Wakeman, but instead Oliver Wakeman (son of the Caped One). And taking the place of Jon Anderson is Canadian vocalist Benoit David, formerly lead singer in – of all things – a Yes tribute band.

I’m not the least bit interested in the whole is-it-or-isn’t-it-Yes debate. But even those who do prattle on tirelessly about such matters should concede that if Squire’s there, it’s Yes. A more important question is: how does this sound?

For the most part, with some important caveats, In the Present is pretty fine. Squire’s thunderous, throaty bass lines carry the day, White is as precise as ever, and Howe manages the tricky feat of playing the same way every time and keeping it interesting (exciting, even). Oliver doesn’t show off quite as much as Dad did/does, and Benoit sounds like a cross between Anderson and the only other singer to front yes, Trevor Horn. Which is to say, Benoit hits most of Jon’s high notes, and is possessed of a bit more presence than Anderson when working lower registers.

The set list on this 2CD package does a fairly good job of surveying the various eras (and styles, and lineups) of this band. As expected, The Yes Album, Fragile and Close to the Edge (the 1971-72 era) are all covered reasonably well. Late-70s Yes gets less attention, but to be fair, those years were a rough patch for many a progster. (“Onward” from Tormato gets a brief reading.) A few surprises are tossed in: “Astral Traveler” dates from Time and a Word (1970).

Where things get unusual is in the inclusion of not one but two songs from Drama, the sole (until 2011’s studio album Fly From Here) Yes album to not feature Anderson on vocals. But before you get too excited, I must warn you: “Tempus Fugit” doesn’t fugit all that much. The band takes the tune at a pace several notches slower than the original. The playing is precise and the song still (sorta) rocks, but the slower pace gives the track a somewhat turgid feel. Listening to it, I can’t help thinking, “C’mon, guys…pick up the pace.”

And not to call it a disgrace, but the slowness continues on “Yours is No Disgrace.” I’m not at all sure the reasons for the change: I’ve heard White’s work on other releases – most notably his 2011 album with Tony Levin and David Torn – and he’s still got the chops and the fire. While many older rock acts drop the keys of their old song to account for the inevitable lengthening of vocal cords, this downshifting in tempo is a bit harder to fathom.

In a nod to the breath of life that the 90125 era gave to the Yes brand, the group trots out “Owner of a Lonely Heart.” But its inclusion is among the show’s weirder moments when it’s thought of in context: of the five men on stage, only two – Squire and White – were involved in the original. Steve Howe’s guitar work – excellent in nearly every context imaginable – somehow doesn’t fit in a song that originally featured the shredding 80s style of Trevor Rabin. And even in the able hands of Oliver Wakeman, Trevor Horn’s orchestra-hit samples sound, well, silly.

Despite those criticisms, highlights abound. “And You and I” gets some subtle, interesting arrangement tweaks. And Howe gets his usual – and well-deserved – solo acoustic spotlight; here it’s “Corkscrew,” a number that points out the Spanish influence in his style. The showstopper, however, is a reading of another Drama cut, “Machine Messiah.” Initially something of a self-parody, the track tossed all of the prog tropes into the blender. But hearing the song extended and onstage, it works as a sort of (relatively) modern prog epic. David and Squire harmonize beautifully, while Squire’s bass delightfully stomps on everything. White’s drumming is at its most nimble, Howe gets a real workout on guitar, and Wakeman gets a chance to provide some – to coin a phrase – dramatic – parts. True, it’s slowed down a half-notch from the studio version of some three-plus decades ago, but it remains an exciting eleven-plus minutes.

“Heart of the Sunrise” finds the band firing on all cylinders. We’re halfway through the second disc, and the band finally seems to have found its footing. The earlier numbers were all okay – not a thing wrong with ’em other than the few quibbles mentioned — but somehow things seem just, well, better now. “Roundabout” – the group’s most well-known song save “Owner of a Lonely Heart” – sounds every bit the equal of the Yessongs version. Wakeman’s keyboard runs are filled with power and beauty. The show ends with a note-perfect “Starship Trooper.”

This group held together after this 2009 show and tour, heading into the studio to cut Fly From Here with producer Trevor Horn (Jon Anderson fans take note: Nobody ever truly leaves Yes, it seems). Oliver Wakeman either quit or was fired; another Yes alumni, Geoff Downes, took his place, reprising his role from the Drama days and reuniting with his Buggles partner Horn. The resulting Fly From Here was Yes’ best studio effort in decades.