Home  »  holiday • review   »   Album Review: The Grip Weeds – Under the Influence of Christmas

Album Review: The Grip Weeds – Under the Influence of Christmas 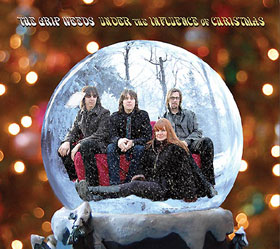 I suspect I’m not alone in my thinking that holiday-themed albums are often greeted with some trepidation. Oftentimes saccharine sentimentality trumps all, and the results are mawkish, half-baked or otherwise ill-advised. For every “Happy Xmas (War is Over)” there are three like “Wonderful Christmastime.” The occasional inspired concept album comes along: witness The Husky Team‘s Christmas in Memphis. And there have been some interesting failures in the genre – Paul Revere & the Raiders‘ A Christmas Present…and Past is pretty strange, and ultimately worthwhile – but generally, not-so-good is just plain not-so-good.

Happily, the approach that The Grip Weeds have taken on Under the Influence of Christmas, their 2011 entry into this subgenre, sidesteps the musical clichés. Instead the New Jersey quartet – with some able assistance; more on which forthwith – has crafted a rock album that just happens to contain songs with a loose Christmas theme.

Exhibit A in the “loose” category is a cover of The Pretenders‘ “2000 Miles.” Other than a lyrical mention of Christmas time, the song isn’t any sort of holiday number. But The Grip Weeds infuse it with their brand of jangle and solid bottom end, and the guitar-playing half of the Smithereens – Pat DiNizio and Jim Babjak – offer (respectively) vocal and axe-wielding support.

Speaking, as I was, of Paul Revere and the Raiders: legendary ponytailed singer Mark Lindsay makes a welcome vocal appearance out front on a Grip Weeds original called “Santa Make Me Good.” Though live-performancewise, Lindsay mostly treads the oldies circuit these days, his turn here shows he’s lost little (if any) of the vocal fire he brought to “Just Like Me” some 45 years ago (“YAY-ughh!!” indeed).

A straight-ahead rocking version (with flute, natch) of Jethro Tull‘s “A Christmas Song” features The Grip Weeds’ Kristin Pinell on lead vocal. The group does eventually do one of those classical-hymn-in-rock-style bits in “God Rest Rest Ye Merry Gentlemen,” but their arrangement sounds more like something off Nuggets II: British Empire and Beyond. Specifically, it recalls a cross between Fire‘s “My Friend Jack” and The Yardbirds‘ “Still I’m Sad,” with drummer Kurt Reil channeling his inner Keith Moon. Neat-o.

That Emerson, Lake & Palmer‘s “I Believe in Father Christmas” has become a holiday classic is one of life’s little ironies. The Grip Weeds play this one pretty straight, hewing closely to the original arrangement, though they amp up the electric guitar a bit. A couple of originals numbers – “For the Holidays” and “Christmas Bring Us” – manage to be holiday-themed yet still of a piece with the general Grip Weeds musical approach; on one level ,the lyrical subject matter allows the group to branch out on instrumentation, though they’ve never needed an excuse on that score. “Christmas, Bring Us” rocks as hard (and soars as high) as any of the Grip Weeds’ best work.

“Hark The Herald Angels Sing” starts off a capella, and then dives into a mid-tempo Rickenbacker jangle redolent of The Byrds. The lyrics don’t exactly rock, but it’s the closest the album comes to the religious end of the December holidays. The disc closes with an inspired cover from Dr. Seuss: “Welcome Christmas.” Though, you might not recognize the How the Grinch Stole Christmas number in its stomping rock guise here.

Under the Influence of Christmas is that rare holiday album that probably sounds as good in the summer as it does in December.