Album Review: The Cleaners From Venus – In Chimp World 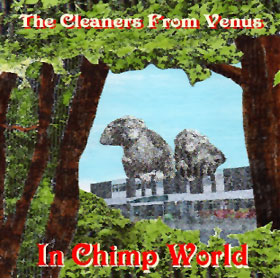 In a world rife with uncertainty, it’s comforting to know that some things remain sturdily reliable. One of these things is Cleaners From Venus, the nom de rock of Martin Newell and his latest partner in chime (heh), Dave Allen. Resurrecting the band/project name he more or less retired some twenty-plus years ago, Newell released English Electric and its odds-and-sods companion The Stopping Train a mere several months ago; when I interviewed Newell in early 2011, he told me that work was already progressing nicely on a followup; he even shared with me an early mix of the forthcoming album’s opening track, “Stars on a Tray.”

There’s nothing especially groundbreaking on In Chimp World, the latest from the Cleaners. But then why break new ground when the plot you’re working is so fertile? This familiar ground yields the shimmering “The Shadows and Me,” filled to the brim with Newell trademarks: highly memorable melodies, beautiful harmonies (overdubbed by the man himself), chiming guitars, solid mid-tempo beats, clever wordplay and endearingly lo-fi production values.

A bit about that whole lo-fi thing, if I may. A better term likely exists; “lo-fi” suggests a slapdash aproach that implies disinterest. Nothing could be farther from the truth when it comes to Martin Newell. The thing is, he’s clearly more interested in spending time and creative energy in the writing and arranging of the songs. Getting them committed to tape (or whatever other medium) is something of an afterthought; by design it’s less important. The Cleaners’ production aesthetic is never hard on the ears, and modern Cleaners recordings aren’t as “hissy” as the ones of old.

Dave Allen even gets a songwriting spot, suggesting he might be the Cleaners From Venus’ own version of Colin Moulding: “Bloody Tuesday” mines the vibe and arrangement of the Kinks‘ “Sunny Afternoon” for an original song. On “Dear Wesley” Newell echoes of Ray Thomas‘ spotlight number for the Moody Blues, “Dear Diary,” but appends a stinging electric guitar solo to the end. Overall instrumentation is basic and familiar: electric and acoustic guitars, a spot of drums, bass guitar and keyboards (mostly acoustic piano). Speaking for themselves, the arrangements on In Chimp World make the strongest case possible that nothing else is needed. And one can safely assume that the occasional ramshackle arrangement – see the Mott the Hoople-ish “Dirty Stop Out” – is purely by design. There’s a homespun, pastoral vibe on many of these songs, most notably on the set-closer “Theme for Farm Shop,” and any other vibe would be less than genuine for songs like these, recorded at home.

For songwriting and performance that’s every bit the equal of such indelibly British characters as Raymond Douglas Davies, you can do no better than Martin Newell’s Cleaners From Venus. It’s a delight to find that this largely unheralded national treasure, is back in action for the second decade of this new century.

As of December 2011, Allmusic.com – generally a reliable authority on such matters – would have its readers believe that the Cleaners don’t exist: their bio stops in the 90s, and none of the (now three) 21st century releases are listed on the band’s discography. Despite that oversight, In Chimp World isn’t hard to find: visit Kool Kat Musik, the band’s American distributor for CD and download versions.