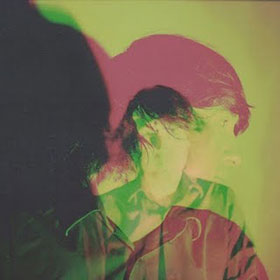 When a record opens with wordless vocal harmonies, the first place my mind goes is to “Our Prayer” from the Beach Boys‘ SMiLE. But on Mikal Cronin‘s self-titled album, he’s got a lot more on his mind than that sort of (admittedly impressive) thing. That track, “Is it Alright” does indeed start that way, but it quickly launches into a melody and arrangement that calls to mind at least four disparate elements: surf-era Beach Boys, earnest strumming Violent Femmes, the crunch of the Replacements, and the manic flute work of Jethro Tull‘s Ian Anderson. And that’s all in the album’s first three and a half minutes.

Mikal Cronin is, en toto, something of a cracked folk-psych outing, but so many other sonic elements are deftly ladled into the mix that such a label is unjust pigeonholing. Arena-sized rock swagger is offered up on “Apathy,” with some skronky sax briefly echoing the coda of “Hey Jude” before heading to avant-jazz territory. All within a big rock beat, though: wow.

“Green and Blue” suggests what the Jesus and Mary Chain might’ve sounded like with Phil Spector behind the boards; how’s that for a scary thought? Sheets of noise are applied to a catchy melody. “Get Along” is almost a campfire singalong, except for a thundering bass line and some Everly Brothers style harmonies buried deep in the gauzy arrangement.

A keyboard part that – genuinely or synthetically – conjures the feel of a harmonium or pump organ is the centerpiece of the brief “Slow Down” (most definitely not a cover of Larry Williams by way of the Beatles). Heavily distorted, chugging guitars atop a running bass line form the basis of “Gone,” a poppier take on the sort of thing one might expect from The Black Angels.

“Situation” reaches back to the early sixties again – especially with its insistent use of tambourine – but adds an ever-so-slight spooky garage vibe, and a fuzzed-out guitar solo that’s equal parts Electric Prunes and Sonic Youth. “Again and Again” sounds like the Byrds updated for the 21st century. “Hold On Me” applies the epic, sweeping feel of Brill Building pop to an echo-laded acoustic number with close vocal harmony: shades of Lee Hazlewood and his love affair with Phaedra here.

The set wraps up with an initially melancholy number called “The Way Things Go.” Here Cronin tosses in bits of everything that’s come before, and adds damn near everything that hasn’t: sunshine-pop piano melody a la Paul Williams; anthem-style rock arranging; heavy drum fills circa 1967; toe-tapping Broadway feel; on and on. It’s something of a pop music travelogue, and it’s among the finest on this consistently fine debut album.

With the exception of drums and a bit of flute, all sounds on Mikal Cronin come from the artist himself. He’s one to watch; his is one of the breakout debut albums of 2011.