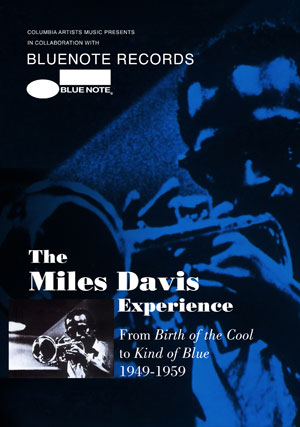 Miles Davis’ work passed through a number of phases; the characteristics common to all his musical eras were his uncompromising attitude toward composition, arrangement and performance, and his commitment to innovating, moving forward. A current aggregation of young players is traveling the country to bring the music of Davis’ earliest work to the masses. A traveling show titled The Miles Davis Experience: 1949-1959 seeks to recreate the style and substance of Davis’ music from that formative era.

I caught one of the later dates on the current tour, a November performance at the Bardo Fine & Performing Arts Center on the campus of Western Carolina university in the tiny mountain town of Cullowhee NC. In the classic-meets-steampunk architecture of the Bardo Center, to a house of roughly 500 (mostly WCU students), a prodigiously talented five-piece group traveled the 1950s Miles Davis timeline with the aid of narrator Donald E. Lacy, Jr.

Davis’ uncompromising attitude seems to have been a guiding concept for this project. Miles Davis’ work of that era – both as bandleader and on other artists’ recordings — ran the gamut from highly accessible, melody-based work like his reading of Rodgers and Hammerstein‘s “Surrey with the Fringe on Top’” to more abstract, difficult cuts like the hyperkinetic “Salt Peanuts.” But for The Miles Davis Experience, the numbers chosen fell decidedly toward the challenging end of the scale. For listeners weaned on a diet of pop or rock music – and/or, for that matter, soul, R&B, blues, country, funk, disco and almost any other genre one might care to reference – there was little in the performance on which to hang one’s musical hat. Those (like this writer) not schooled in jazz might have found it difficult to follow the music, which adhered to few conventions of melody, verse-chorus structure, or beat. Put another way, you’d be unlikely to find a concertgoer humming any of the tunes from The Miles Davis Experience on their way out of the concert hall.

None of that necessarily made the performance less enjoyable; instead, it demanded more of the audience, presented as they were with challenging works of music. What the crowd was also presented with was some mighty expert playing. The no-electronics instrumental lineup featured Jason Palmer on trumpet (taking Miles’ leads); Walter Smith III on tenor saxophone (as often as not, playing John Coltrane’s parts); Sam Harris hunched over his piano, Bill Evans-style, but with his back to the audience; Harish Raghavan on just-barely-audible (yet deeply felt) upright bass; and drummer Justin Brown.

All but Brown took an ultra-cool sartorial approach to their visual style; the drummer went for a casual look in a striped t-shirt. Harris kept his eyes on his hands most of the evening; if he stole a glance toward his band mates, he did so without being noticed by the audience. Other than a few quick glances (and even rarer appreciative, almost imperceptible post-solo nods), none of the players seemed to make any eye contact with each other.

Nor, for that matter, with the audience. Not a word was spoken from the stage by any of the quintet. That duty was left to Lacy, who conveyed his words with gravitas in the extreme. Riffing on the words of poets and musicians alike — Langston Hughes and Quincy Jones were among the quotable notables invoked – Lacy provided narrative setup for each segment of each set. His emotive delivery set just the right tone for the music to follow.

As is standard, each player took a solo or three; sometimes these were spotlight solos, within the context of the band; other times these were true solo excursions, with the remaining players exiting the stage so the spotlight could literally be trained on a single player. All were impressive in their technical (and athletic) brilliance, but Smith’s extended sax solo was jaw-dropping in its intensity. Not always “musical” in a traditional sense, Smith’s solo was – in places – more of the I-didn’t-know-you-could-do-that variety. And although for most of the evening Justin Brown seemed almost to be holding back a bit, he got a chance to shine — and evoke fond memories of Art Blakey‘s style — on his energetic, inventive, colorful drum solo. It was made all the better by the stage setup: his kit was set almost perpendicular to the stage front, allowing the audience to witness his complex yet lyrical drumming work.

A minimal stage setup – the instruments, as few mics and stands as possible, a couple monitors – kept the focus on the players. Tasteful and minimal lighting applied focus as needed, and a multi-screen backdrop projected relevant images (mostly archival photos and album covers). I later heard one concertgoer muse that perhaps more could have been done with the multimedia portion of the presentation. While my own tastes tend in that same direction, on reflection I’m convinced any effort in that direction would have been inconsistent with the overall tone of the show.

Two sets — each running about 45 minutes – were punctuated by an intermission, and post-show at least some of the players wandered into the lobby crowd to receive well-earned one-on-one accolades.

Postscript: A minor mystery is the fact that The Miles Davis Experience: 1949-1959 is billed as “A Collaboration with Blue Note Records.” During the decade in question, Davis was first signed with Capitol (for whom he recorded Birth of the Cool in 1949) and then went to Prestige, a label for whom he recorded abut ten albums under his own name. (From 1951-56 Davis was under exclusive contract to Prestige.) Then he went back to to Columbia. Davis cut two (admittedly important) records for Blue Note, Vol. 1 and Vol. 2. One wonders why Concord Music Group — the conservators of the Prestige catalog — didn’t get in on this action. In the end, jazz fans should be glad that somebody – anybody — helped with the funding/promotion/etc. to make this compelling and important show a reality.