Album Review: Jakszyk, Fripp and Collins – A Scarcity of Miracles 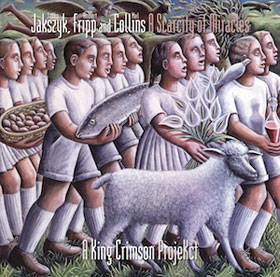 In my recent feature on the Two of a Perfect Trio tour featuring the Adrian Belew Power Trio and Stick Men, I posited the (largely rhetorical) question: when is a band King Crimson, and when is it not? That question – one which has no real answer, I believe – comes racing back to me as I listen to A Scarcity of Miracles, the new album credited to Jakszyk, Fripp and Collins.

The three artists name checked, of course, all have major connections to King Crimson: Robert Fripp may insist he’s not the “leader” of King Crimson, but he’s certainly the only constant over the band’s on-off history (1969 to now, more or less). Renowned reedman Mel Collins appeared on three Crimson LPs: In the Wake of Poseidon, Lizard and Islands (all of which have been reissued as part of the 40th anniversary remaster project). And Jakko Jakszyk was the able stand-in for Fripp (guitar) and Greg Lake (voice) in the 21st Century Schizoid Band, a project that – while technically not Crimson – was truer to the early Crimson in sound and lineup than anything else.

Moreover, the rhythm section for this album is Tony Levin (bass, stick), a man who’s been on nearly every King Crimson recording since Discipline, and Gavin Harrison (Porcupine Tree’s drummer, but also the official King Crimson drummer from 2007-2009, at which point Crim went on its umpteenth hiatus). And A Scarcity of Miracles is officially designated as “A King Crimson ProjecKct” (“P7” for those keeping score).

With that out of the way, what sort of music have we on A Scarcity of Miracles? Well, the genesis of the project offers remarkably little in the way of clues. As explained in Fripp’s liner notes, the recordings grew out of an afternoon of extemporaneous improvisation between Fripp and Jakko. With such a basis of sound, one might expect an unconventional product, one with few connections to the pop song idiom.

One would be mightily wrong, as it happens. Jakszyk took the sound files from the session and constructed them into a half-dozen highly melodic songs – yes, songs —  that make up A Scarcity of Miracles. Mel Collins added his alto sax, soprano sax and flute to the recordings. And then – only then – Levin and Harrison added rhythm tracks. So, although the players involved followed an almost inverse-to-tradition methodology, the result ranks among the most melodic and accessible collections to come out of the Crimson camp in ages.

In those liners, Fripp also notes that “for the first time since 1981, the gene pool drawn upon is more English than American” (Levin is American). Exactly what to make of that is up to the reader/listener, but it’s true that A Scarcity of Miracles (an official Crimson ProjeKct) is very different than – yet inextricably related to – the Two of a Perfect Trio aggregation (tellingly not an official ProjeKct), a mostly American group.

The songs are all credited to Jakszyk/Fripp/Collins, but it’s Jakko who assembled the songs from the raw files, wrote the lyrics, and sang them. Thus it is his style that most indelibly forms the character of A Scarcity of Miracles. Fripp does play more of his trademark guitar runs — not just soundscapes, though there are plenty of those as well – and he is more prominent here than on (relatively) recent Crimson albums or on any of his numerous guest spots (John Wetton etc.). Collins’ lyrical reedwork floats in and out of the mix, always seeming to appear at precisely the right time to offer the right thing, and then receding into the shadows when it’s someone else’s (usually Fripp’s) turn to shine.

The songs drift by in a melancholy mist: A Scarcity of Miracles rarely rocks out in a traditional sense, and there’s no “Red 2011” to be found here. The vibe is closer to lite-jazz, but wholly lacking in the vapidity of that justly-maligned genre. In fact the songs work on two levels: they can serve as an aural backdrop for whatever else you might be doing (similar to Eno’s ambient work, but with higher melodic content), or they can be examined closely. Choosing the latter path rewards the listener with inventive splashes of exotic eastern influences, thanks mostly to Jakszyk’s Gu zheng (a Chinese zither sort of thing visually reminiscent of a pedal steel guitar).

“The Other Man” is the heaviest track on A Scarcity of Miracles, and it’s also the most foreboding, mysterious musical offering. A few son-of-“Frame by Frame” licks crop up now and then, one of the few instances in which the album references earlier Crimson (though Collins’ distinctive saxes certainly call to mind some of the better moments on Islands). The atmospheric “The Light of Day” is the least conventional track structure-wise, but its dark, foreboding feel will draw the willing listener into its maelstrom.

A fascinating listen, A Scarcity of Miracles may well qualify as that rarest of breeds: the Crimson-related record you can play for your friends who don’t think they like progressive music.