Sunday was the last of the three-day Moogfest. I kept my plans fluid until the last possible moment, not deciding which acts to see until minutes before I made the (five-minute) drive downtown. I predicted – accurately, as it turned out – that attendance for these shows would be a bit lighter than Saturday’s. Some people purchased single-day passes for Friday and/or Saturday, and some out-of-towners had to head home for work or school. Unlike some Asheville-based festivals (Bele Chere, for example), adult beverages were still for sale during the Sunday part of the fest. Always a good thing, that.

The Drums
Shortly before I left home, my son called me from Harvest Records to recommend I see The Drums at their 6:30pm set at the Thomas Wolfe. As he spoke, I could hear them in the background, doing an in-store. I took his advice — he does know what I like – and checked them out.

The Drums are a young band; none of them looked to be much over 21. This fact is noteworthy mainly because their music betrays clear influences of such bands as The Smiths (who operated 1982-1987) and Echo & the Bunnymen (who got their start even earlier, and enjoyed an 80s heyday). They put on an energetic set of catchy music, but suffered attendance-wise by being scheduled concurrently with M83, onstage at the adjacent Asheville Civic Center. Had this not been the case, I would have stayed for their entire set. Alas, after a half-dozen tunes, I decided to follow the herd and check out M83 as well. 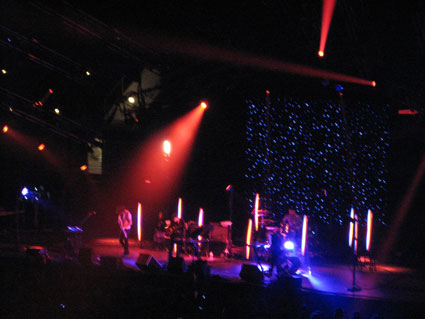 M83
With a set decorated with vertical columns of might — sort of an inverted take on Radiohead’s 2008 stage setup – M83 put on another high-energy set. The large Civic Center was the ideal venue for this music, as it allowed those so inclined to take to the floor and undulate as the spirit moved them. Honestly, nothing about their music stuck in my mind long after the show ended, but neither did I actively dislike it.

Neon Indian
I was more familiar with the music of Neon Indian going in, having reviewed Mind Ctrl: Psychic Chasms a year ago (my son had turned me onto them, as well). For this show, a fairly large band – six or so musicians – played the multi-layered music that incorporated samples, loops and plenty of actual live musical performance. A highlight was the appearance of a guest musician who came out to play a lovely and (no easy thing) expert Theremin solo. 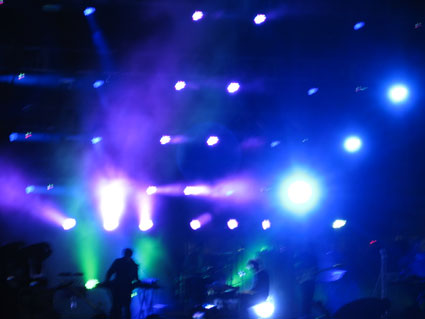 Passion Pit
With time to spare before the 10pm Ford & Lopatin show at the Asheville Music Hall, I wandered over to the Animoog Playground (parking lot) to check out Passion Pit. Well, honestly, I went there to get a best-I’ve-ever-tasted felafel from Suzy Phillips’ Gypsy Queen Street Food truck, but as my dumb luck would have it, Passion Pit was also really good. Lead vocalist Michael Angelakos sounds a lot like a female singer whose name I can’t recall, but that voice worked quite well, set in relief against the sounds the band was making. Lot of traditional keyboard sounds led Passion Pit’s highly melodic, hook-laden songs. Despite the fact that this was an outdoor venue on a chilly Sunday night, the crowd swelled and the band was very well-received. I wouldn’t be at all surprised to see Passion Pit returning to Asheville soon for a gig at, say, the Orange Peel.

Ford & Lopatin
Next, I headed to the tiny Asheville Music Hall for my final Moogfest show, the synthesizer duo of Ford & Lopatin. As the Moogfest website had described their music using words like “dreamier” and “blip and shimmer” I went expecting synthy sounds that leaned toward the chillwave end of things. Not, I reasoned, a bad way to end my 2011 Moogfest experience. Instead, it was a rather uptempo, bass-bomb filled electronica experience. Quite good for what it was, just unexpected.

Some Final Thoughts on Moogfest 2011
In the run-up to the event, I had some concerns that Moogfest wasn’t all that well organized. Email alerts were spotty and infrequent: I’d heard from friends who had received updates, but I didn’t get them (there was a list of advance ticket buyers, and I even contacted – and received confirmation from – the organizers to make sure I was on the list. 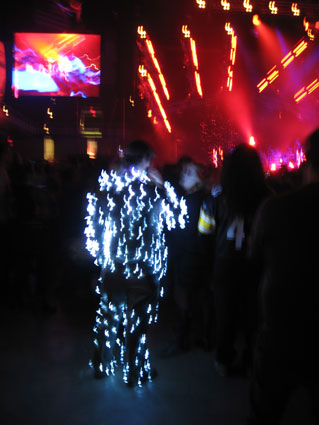 But once I arrived at the festival, I found it to be a model of efficiency. Long lines always moved smoothly, and those tasked with security duties seemed to go out of their way to maintain a cheery, friendly disposition. I would later hear that APD made “several” arrests, but in and between my 20+ shows, I saw very little – if any — of what most would consider bad behavior. Unlike Bonnaroo 2007 – where I saw a guy passed out and puke-stained in a ditch before the first day’s music even started – Moogfest was relatively incident-free.

I don’t know the particulars of the organizers’ arrangement with the city of Asheville, but I should comment on what to me was a stroke of brilliance on someone’s part. Anyone who’s attended pretty much any music festival knows that there is a community of food vendors that shows up at most of these events. You know: the Belgian Waffle guy, the turkey leg people, and so on. Fair enough: they need to make a living, too, and they provide a real service.

But since Moogfest takes place at six venues scattered across downtown Asheville, concertgoers pass by any number of brick-and-mortar establishments ready to serve them. Whether by design or not, the Moogfest approach – no food vendors except the Civic Center counters and three locally owned food trucks in the Animoog Playground – meant that Moogfest was good for Asheville business overall, not just for the organizers. Other festival organizers could learn a thing or two by studying Moogfest 2011. And of course the ticket price – I paid $157.50 for my advance purchase of a three-day pass — provided amazing value for the money. Anyone who bought a ticket and didn’t think it was a good deal, well I’d say they didn’t try hard enough. I’m looking forward to next year’s festival.