Hans-Joachim Roedelius
Approaching this performance, I wondered if it would be little more than an encore of the previous day’s LunzProject set by Roedelius with Tim Story. The venue – the intimate and ever-so-slightly hoity-toity Diana Wortham Theatre – was the same, and when I entered and took my seat, I found a similar stage setup: a table with some electronics on it, and a grand piano. The projected background image was the same as well. Oh, well, I thought. If it is the same, that’s okay, as I didn’t get enough rest last night.

When Roedelius came onstage, he was visibly taken aback at the size of the crowd, and our enthusiastic reaction to him. He made reference to the nearby “77 Million Paintings” installation by his friend and frequent collaborator Brian Eno, and told us that today was his 77th birthday. He promised us something special to commemorate the day. 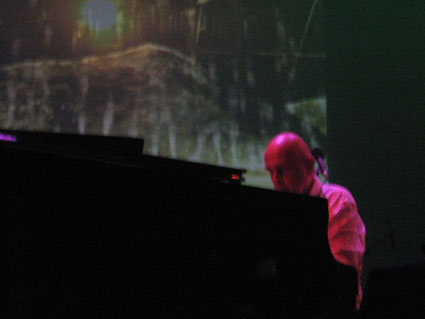 Most of his set involved light melodies played on the piano, the works were pop-song in length and melodic, sort of on the accessible end of jazz, with a bit of new age and classical flavor. Some evoked melancholy, sadness and/or reverie; others were decidedly more sprightly and upbeat. Long, sustained notes on the piano were often allowed to decay into silence, creating an atmosphere not unlike that on “Steal Away” from the 1980 Brian Eno/Harold Budd collaboration Ambient 2 / The Plateaux of Mirrror. Contemplative, transcendent, meditative stuff.

Every now and then during the hour-long set Roedelius would move to the table of electronics, where he had (among other devices) a boombox. In real-time, he would manipulate the devices to create an on-the-fly sound collage. One of these included a bit of Jimi Hendrix’s Woodstock performance of “The Star Spangled Banner.” The most unusual aural collage – his final number before an insisted-upon encore – included a relatively long snippet of choral/opera music and excerpt from Beethoven’s Ninth Symphony. 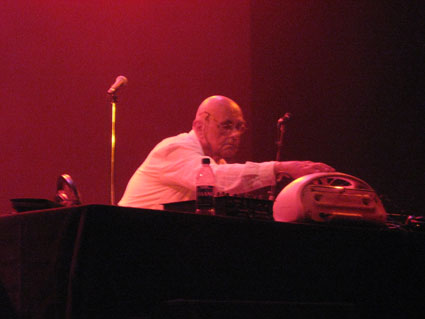 After a rousing, extended and enthusiastic round of applause – one that clearly moved Roedelius – the audience spontaneously launched into a chorus of “Happy Birthday.” Roedelius concluded his time onstage with a brief spoken tribute to the festival’s namesake, the late Dr. Robert Moog. Roedelius made it plain that he owed much to Moog and his synthesizers, Roedelius having started (like Eno) as a non-musician working with synths. It was, he explained, the creative feedback he got working with these machines that led Roedelius to learn more conventional playing on the piano.

Terry & Gyan Riley
I had high hopes for this one, but metaphorical clouds loomed on the horizon. Near the tail-end of Eno’s “Illustrated Talk,” Brian Eno fretted aloud that his question-and-answer time might impinge on the setup and sound check for Terry Riley and his son, guitarist Gyan Riley. From my standpoint, this didn’t seem a serious concern: Eno was scheduled until 4:30pm, and hadn’t run overtime. The Rileys were slated to take the stage at the Thomas Wolfe Auditorium at 6:30.

So when Eno ended, I hoofed across town to see and hear Roedelius’ hour-long 5pm set (see above), knowing I’d have ample time to get back to the Thomas Wolfe in time for Terry Riley. When I arrived, the ushers were holding the audience back in the lobby. 6:30 came and went, and after poking his head into the auditorium, an usher told me, “I don’t know what’s taking so long. They’ve been setting up for hours, and they’re still doing sound check. And…there’s only a piano and a guitar!” Eventually we were let in. 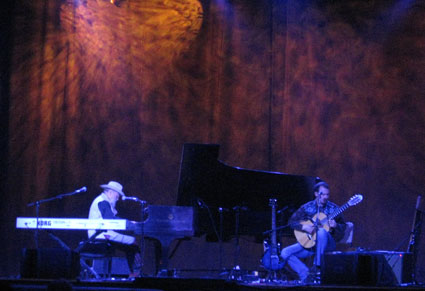 Maybe I’m just not sophisticated enough to “get” it. And I write those words without a hint of sarcasm: I’ve only begun to listen to jazz, for example, in the last few years, and while I love a lot of it, I don’t understand it in the way that I connect with, say, Pink Floyd or the Beatles. So while the first number that Riley & Riley did was pleasing and interesting enough, the set soon thereafter took a detour into what I can only describe as a sort of dada deconstruction of the blues. The elder Riley played some semi-dissonant lines on his digital Korg, while Gyan scraped at – as opposed to played in a conventional manner — the guitar. When the chorus (or something approximating one) would come around, the chord sequence followed a blues pattern, but Terry Riley seemed to be (intentionally, mind you) singing in another key. All this was lost on me.

Gyan Riley showed himself to be a fine and expressive player, most notably when using an acoustic and playing Spanish-style runs. These highlights, ultimately, were too far and in-between to hold the attention of the seated (yet clearly restless) audience.

With all due respect — and nonetheless I count myself lucky to have seen Riley in performance – this show reminded me of how many people (though not me) feel about the work of Yoko Ono. With each song, more and more of the audience took their leave. Few, if any, entered to take their place. At one point, my friend suggested to me, “How about one more song, and then we go?” I replied, “Okay, unless Terry Riley starts singing again.” He did, and we ducked out, heading for the outdoor spectacle that is a Flaming Lips performance.

Next: The Flaming Lips! And still more after that…