Holy F**k
Viewed from a certain perspective, the music of Holy F**k and that of Tangerine Dream are opposite sides of the same coin. Where the German group uses synthesized sounds to create placid, dream soundscapes, the young quartet starts with similar elements – samples, loops and synthetically-generated aural textures – and ends up with something quite different.

Holy F**k’s music is twitchy, high-energy stuff, and onstage a pair of keyboardists…well, wait a moment: it may or may not be accurate to call them keyboardists. True, they have synthesizers in front of them, but at Moogfest, only rarely did they play them in anything approaching a typical manner. Instead, the instruments were treated more as sound generating machines, devices to be tweaked. The knobs and switches got more of a workout than did the black and white keys. A rhythm section ostensibly held down the backbeat, but in reality the loops did a lot the heavy lifting in that department.

Where Tangerine Dream would sculpt compositions around a sustained chord or chord sequence, Holy F**k would build their pieces around sounds. It’s more than a distinction without a difference: the end effect is miles away from the dreamy sounds of krautrock. Closer in many ways to rave-culture music, Holy F**k’s performance did veer occasionally toward melodicism. And the crowd – much younger and more animated than the Tangerine Dream audience – certainly dug it.

Moby
Some acts are associated with a particular time in history. Maybe they somehow perfectly encapsulate the zeitgeist of a given period, or maybe they’re so much a product of that time that their image is inextricably entwined with it. For me, such is the case with Moby. I nearly sat out the 90s from a pop culture standpoint, attending relatively few shows. Nonetheless, a few artists had such high profiles that one knew about them even without trying. Nine Inch Nails, Nirvana, Ricky Martin, EMF, Ice-T…Moby. 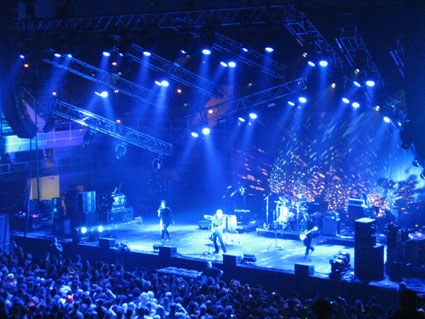 I had a pretty good idea of what to expect from Moby, and he delivered. Running about the stage, Moby switched between guitars, percussion and so forth while his band and a female vocalist kept things moving under, over and around him. Even if you never listened to his brand of relatively warm and humanistic techno (for lack of a more precise term) you’d find the songs familiar.

One slightly disconcerting quality to the show was found in the keyboard player. Situated at the backline of the stage setup and shrouded in darkness, this woman seemed – from my standpoint, at least – to be doing most of the musical work, a sort of woman-behind-the-curtain techno Wizardess of Oz. At times I couldn’t help but think to myself that had Moby, the female vocalist, drummer and bassist all left the stage, the sound coming through the speakers wouldn’t have changed all that much.

LunzProject
My familiarity with Hans-Joachim Roedelius comes chiefly from my knowledge of Cluster, the German ambient outfit that is in turn most well-known for having collaborated with Brian Eno. While many of the acts on the Moogfest lineup tend toward the high-energy techno end of things, I was more intrigued by the list of pioneering (read: older) acts scheduled to perform. Roedelius certainly falls into that category. Collaborating with Tim Story, Roedelius put on a very low-key performance at the tiny Diana Wortham Amphitheater, a venue that seats only a few hundred. A sit-down venue with fine acoustics, it’s the ideal setting for the sort of ambient washes of sound LunzProject brings. 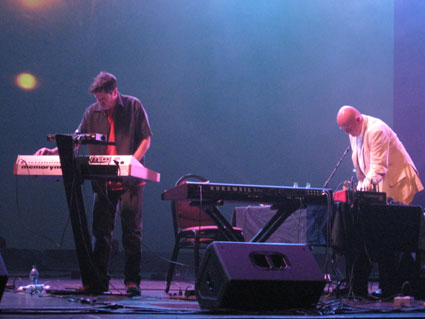 The pieces were mostly soundscapes: Story played a number of the pieces on a vintage Memorymoog, the last of the analog beasts from Moog’s first era. A rarely-seen instrument, the Memorymoog is – in the right hands — capable of delivering staggeringly expressive textures. Contrasting with this rare beast, Story spent the rest of his time behind a Kurzweil K2500, a decidedly modern instrument. (Incidentally, Bob Moog had more to do with development of the latter than the former.) Meanwhile, Roedelius wordlessly tweaked some sound-generating equipment we couldn’t see (it was on a catering table) and occasionally played some spare yet precise lines on a grand piano.

Offstage where he couldn’t be seen, someone operated a laptop that controlled large projections that filled the back wall of the stage. Close-up shots of water emanating from a pipe, slow-moving tracking shots of an ascent inside a power grid…those sort of placid images floated across the screen. A few of the images seemed to be of local Asheville landmarks, so it may well be – I’m not sure about this – that the operator is a local visual artist. In any event, the visuals suited the sounds quite well.

As far away from the raving sounds of many Moogfest headliners, the LunzProject performance was a highly enjoyable experience. In terms of the material, the pieces in the duo’s set most closely resembled the kind of things one hears on Cluster’s albums. The set was warmly (even a bit reverentially) received by the intimate crowd, and the performers were clearly moved by the reception they received.

For this concertgoer, that wrapped up Friday’s program. With LunzProject ending at 12:30, I called it a night. Other stages would remain active until 2:30am. But Saturday would be a full day for me, with events scheduled from 2pm to 2:30am.