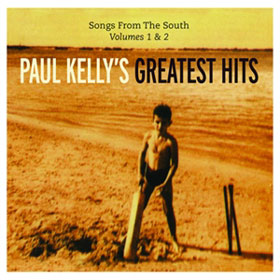 The new 2cd collection Songs From the South Volumes 1 &2 is subtitled Paul Kelly’s Greatest Hits, but if you live in the USA, the subtitle could as easily have been Forty Paul Kelly Songs You’ve Never Heard Save For One or Two At Most. Which isn’t to say that this isn’t a winning and varied collection of songs; it certainly is.

Fans of what they used to call “college rock” may remember “Dumb Things” from Paul Kelly‘s 1987 album Under the Sun (I have the vinyl LP), and apparently the retro-garage raver Gossip‘s “Darling it Hurts” actually charted in the USA that same year (I wasn’t listening to mainstream radio by then, so I completely missed it). Kelly’s style is hard to describe, in part because he’s tough to pin down. The rock-oriented songs that kick off the first disc (covering 1985 to 1997) have a style that’s not miles removed from Hunters & Collectors, Midnight Oil, The Church and even, occasionally, Crowded House (if you hadn’t guessed, Kelly is Australian). Chiming guitars, strong melodies and an of-its-time production aesthetic are found in spades on these cuts.

But there was (and remains much more to Paul Kelly. Possibly to give his thoughtful and incisive lyrics greater emphasis, after a couple rock-leaning albums, he opened his style up to include folkier arrangements. Kelly has a knack for tackling universal themes in a highly personal manner; in fact he often does so in a way that can make the listener uncomfortable. Curiously, his story-songs often leave a key piece of the story missing; perhaps this is to invite/allow the listener to fill I nthe blanks, thus making the story hit closer to home. But on songs like the troubador-ish “Everything’s Turning to White,” it remains a bit difficult to sort out exactly what the story’s ultimately about. Imagine a joke with a great buildup and no punchline; now remove the humor as well.

Some songs are lost in translation, so to speak. Seven-plus minutes of the Dylanesque “Bradman” may seem excessive for anyone not well-versed in the history of (I guess) Australian cricket. But on songs like “Sweet Guy” and “From Little Things Big Things Grow” Kelly hits his mark, pairing attractive melodies and highly personal lyrical subject matter. He’s unafraid to fold in elements of old-style country and folk in to his songs, and has an innate sense for music that fits his words. To wit: he and his band The Messengers rock out big time on “Pouring Petrol on a Burning Man.”

That stylistic variety carries over to the second disc (focusing chronologically on the period 1998-2008). “Nothing on My Mind” has a beat that’s equal parts soaring and funky. It also features blistering fuzz guitar fills. “I’ll Be Your Lover”sounds like something George Harrison might have done in his Cloud Nine era. But plenty of songs are built around a Kelly solo vocal and spare instrumentation: “Love Letter” puts banjo and fiddle up front. “Gathering Storm” sounds uncannily – both in its music and lyrics – like a Blood on the Tracks outtake.

And so it goes. Typically a greatest-hits collection serves to give fans a quick and easy way to collect the most commercially high-profile tracks of their favorite artist. But Songs From the South won’t serve that function for most listeners in the northern hemisphere. Instead it’s a sturdy collection of the mostly-unheard work of an Australian with a strong vision. Instead, it may lead those who hear it to delve deeper into Paul Kelly’s deep back-catalog (twenty albums and counting).