Album Review: The Buzzcocks – What Do I Get? 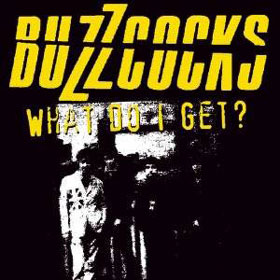 The CD+DVD package What Do I Get? documents the reunited Buzzcocks on a live date at Shepherds Bush Empire in 2003. And if the title is a question, the answer is simple: a barrage of ear-bashing punk, catchy melodies played at amphetamine-fueled speed before an adoring, pogo-ing crowd.

The hits are all here, and while the DVD shows that original Buzzcocks Pete Shelley and Steve Diggle (both on guitar) have aged a bit since the heyday of 1977’s “Orgasm Addict,” to the ears they haven’t changed much. The songs tumble into one another a la The Ramones, but there’s a ferocity (and lack of those Noo Yawkers’ cartoonish element) and sense of danger to these songs. Even when they’re singing about love(!), Shelley and Diggle convey menace. While John (Rotten) Lydon felt compelled to let us know “We mean it, man,” sincerity is never in question with the Buzzcocks.

Depending on one’s constitution, this live set will wind you up or leave you drained. Or, quite possibly, both. As edited on both the album and the audiovisual document, the band doesn’t leave enough time between songs for the audience to register approval; thus it must be done during the songs. The set is paced maniacally, with the hits and near-hits (“I Believe,” “You Say You Don’t Love Me,” “Ever Fallen In Love With Someone You Shouldn’t Have?”) placed toward the second half of the show.

It’s something of an endurance test to get through the DVD: the film runs more than three and half hours, rarely letting up in intensity. Obviously, there’s material on the DVD that’s not on the CD, but it’s more of the same. That’s certainly a good – if not great – thing if you like the wall of roaring instrumentation and yelping that characterizes the Buzzcocks. Clearly, What Do I Get? is not for the faint of heart. But for those receptive to real-deal UK punk played in a we-really-do-mean-it-man fashion, What Do I Get? is unbeatable. Pop tunes at 100mph rarely get as good as this.