Home  »  Uncategorized   »   Preview: Jump Out the Window – The Brotherhood Story

Preview: Jump Out the Window – The Brotherhood Story

April 30, 1967 — On this Sunday evening, the popular group Paul Revere and the Raiders were scheduled to appear for the first time on the hit television program The Ed Sullivan Show. At the peak of their popularity, the Raiders were slated to perform their hit “Good Thing” from The Spirit of ’67. It was planned to be one of the final performances by the most celebrated lineup of the band: the power trio of guitarist Drake “the Kid” Levin, bassist Phil “Fang” Volk and drummer Mike “Smitty” Smith had all given their notice to Revere, having made plans to form their own group. What could have been a high point of their time as members of the hit-making Raiders instead marked the abrupt end of a chapter. Shortly after the performance, Drake, Smitty and Phil were off to pursue their musical vision, one quite different from the band they had just left.

Drake, Phil and Smitty founded a group that would record three albums, perform a handful of concerts, and remain together barely two years. But while the music was heard by few at the time or since, during their brief time together, their band, Brotherhood, existed at the center of an exciting musical scene and created enduring music that deserved more success than it found… 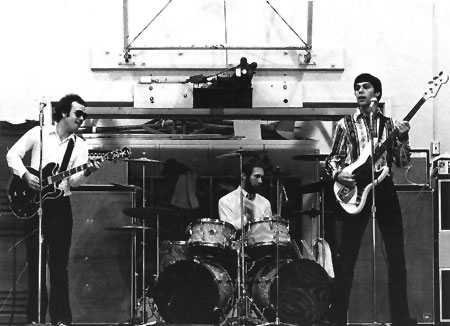 Above: a rare live shot of a rare live performance by the final lineup of Brotherhood (L-R: Drake Levin, Joe Pollard, Phil Volk). Circa 1969. Photo by kind permission of Phil Volk.
To read the rest of my feature, JUMP OUT THE WINDOW: THE BROTHERHOOD STORY — not online; available in print only —  order the latest issue of Ugly Things Magazine. This in-depth story is based on extensive interviews with many of those who were there, then.

UPDATE: A serialized version of the entire story starts on this blog on Monday April  24, 2012.