Home  »  Uncategorized   »   The dB’s and the Collective Unconscious

The dB’s and the Collective Unconscious

Chalk it up to coincidence if you must; me, I’m not superstitious but the timing is remarkable. Yesterday I was contacted by a fellow NC-based writer/blogger/music fan, asking permission to excerpt a couple of pieces I wrote. Both (just slightly) pre-date this blog/zine. One of these was a review of the delightful hERE aND nOW album from Peter Holsapple and Chris Stamey; the other is a feature/interview with the duo, better known as half of The dB’s. 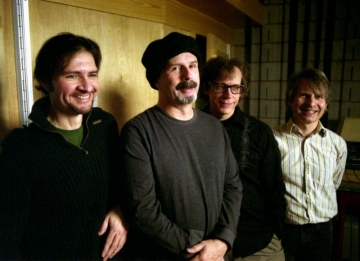 So it was with a bit of surprise that I greeted the news release that landed in my inbox a mere few hours later. I rarely do this, but allow me to reprint the release verbatim:

THE dB’s TO RELEASE NEW SONG

“Revolution of the Mind” MP3 brings together original members Peter Holsapple, Chris Stamey, Will Rigby and Gene Holder as they target album release for 2012.

CHAPEL HILL, N.C. — The dB’s will release a new song, “Revolution of the Mind,” for free download at <http://www.thedbs.com>. The high-energy rock track was recorded by Peter Holsapple, Gene Holder, Will Rigby, and Chris Stamey during sessions for the band’s new album, Falling Off the Sky, due in spring of 2012, and includes additional “revolutionary” guitar by Ira Kaplan (Yo La Tengo) and background vocals by Django Haskins (The Old Ceremony).  “The MC5 played in our hometown of Winston-Salem, NC, in 1971,” Stamey related, with a nod to the timely track’s sonic and political inspiration, “and none of us were ever the same again.”

The band is best known for its critically hailed proto-indie pop 80s albums Stands for deciBels and Repercussion. Due to conflicting geography, work and tour schedules, the reunited quartet has taken its time but has finally completed  the new album, “Falling Off the Sky.” It will be worth the wait. But for now, the nonalbum track “Revolution of the Mind”  should serve as an appetizer.

Two NC-based artists have been inspired by recent events to create videos for the song, also available from the band’s site: one by Jerry Stifelman of Creato Destructo Imagery and the other by Greg Parsons (editor) and Mike Allen (director).

Count on me to keep readers updated on this one.