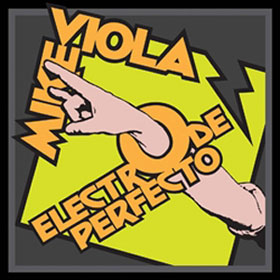 He probably gets tired of the reference, but most people know Mike Viola’s raspy-yet-expressive voice from the theme song to That Thing You Do! Before and since, Viola has had a career of his own, the sort that flies beneath the commercial radar but garners rave reviews from those in the know. Especially if said in-the-know types dig music of the powerpop persuasion.

Viola’s band The Candy Butchers released an EP and some albums in the 90s but never got the sort of notice that peers like Fountains of Wayne enjoyed. That’s a shame, since those discs are littered with fine, winning, catchy songs that display a wide range of emotion and style.

Viola’s latest is called Electro de Perfecto, and while the sonic hallmarks — clear, upfront and intimate production, hooky arrangements, sold songwriting and clever/thought-provoking lyrics – remain intact, there’s a very strong undercurrent of pathos and regret throughout the disc. In this context, even a yearning romantic rocker like “Get You Back” is delivered with a tinge of sadness, as if to suggest that, well, maybe the protagonist won’t get the girl back in the end.

The title track even includes the lyric, “This is a cry for help,” and even a casual listen reveals an unsettling vibe to the songs, as if there’s something wrong, something that’s perhaps a bit serious. It’s made explicit in songs like “Me and My Drinking,” and despite its title, loneliness and sadness pervade “Soundtrack of My Summer.” And what to make of lyrics like “Stuck my fingers down my throat to start my day” and “I got no Plan B”?

The mood is leavened and lightened, certainly, on semi-jokey numbers such as “Fields of Guns’n’Roses,” but even on that track there’s mention of Hotel Chelsea suicides and such. The energy is dialed down for the album-ender, a track called “When the Stars Are Against You.” The listener is left with the inescapable impression that the title sums up Viola’s current life situation. Who knows: maybe not. Maybe Electro de Perfecto is a concept album.

If you’re the sort who insists upon sunny, upbeat lyrics to go with your power-chording powerpop, best avoid Electro de Perfecto. But if you’re up for an album that – edgily so – combines an uptempo musical vibe with some edge-of-worrisome lyrical content, then you may find this boundary-pushing album a rewarding experience. I did.