Home  »  interview   »   Vignettes from the Two of a Perfect Trio Tour

Vignettes from the Two of a Perfect Trio Tour

Part of my recent experience seeing the Two of a Perfect Trio show in Knoxville TN had a fly-on-the-wall quality to it. A few vignettes stand out in my memory, but including them in my feature/interview wouldn’t have made any sort of narrative sense. So I’ve collected these random, mostly-unconnected bits here instead. File most of them under “Life on the Road.” 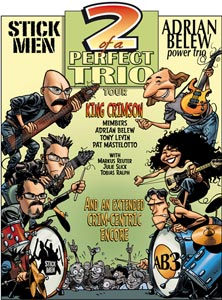 It’s Okay. I’m Supposed to Be Here
Being a music journalist sometimes requires carrying oneself with an it’s-okay-I’m-supposed-to-be-here air; anything less can cause you to miss the show or interview. Ill-prepared promoters and/or tour managers often forget to put your name on the guest list as promised. That was not the case here (the Two of a Perfect Trio tour has a great publicist), but one must always come prepared for an untoward eventuality.

In this case, I arrived at the venue (the historic Bijou Theatre in downtown Knoxville) a few minutes before the appointed 4pm time. The doors were locked, and nobody was around. To the left of the main doors was a single door marked OFFICE or somesuch. It was open, so I went in. Not only were there no people inside, the half-dozen or so rooms/offices (on a few floors) were pretty much bereft of furniture. It looked as if the place was recently abandoned.

On the ground floor of this empty office area, there was a split door made of heavy steel. Sort of like what I used to call a Mr. Ed door, it was split horizontally around waist height. The bottom section was locked. But the top section wasn’t: I opened it to find the Bijou’s lobby on the other side. I hopped over the lower half into the lobby and headed toward the auditorium and stage. I passed a sound tech, and gave him that well-practiced it’s-okay-I’m-supposed-to-be-here look, and kept on walking. I met up with the tour manager and band right on time.

Bedtime Lullabyes
My interview would take place after sound check, which meant I would have a couple of hours to unwind after the drive on winding mountain roads. So I settled in to a seat a few rows back from the stage and silently observed the six band members arrive (one by one or in pairs) and begin setting up their own equipment. A pair of house technicians was on hand to assist, but for the most part everybody handled their own equipment. Refreshingly non-rockstar-ish, I thought (I’m sure they would have appreciated roadies, of course). 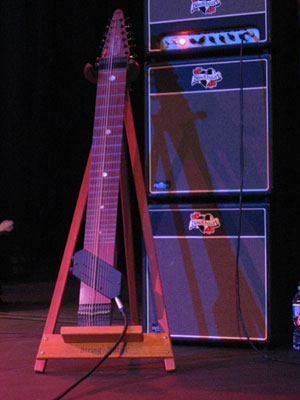 By the time all of them had arrived, touch guitarist Markus Reuter had finished setting up his own system (a single touch guitar with no backup instrument in sight; amplifier; laptop on a stand). He took a brief break, exiting the stage with laptop in tow. Reuter returned a few moments later, holding his laptop. The screen was bright and glowing, and I eventually realized that the full-screen image on it was his wife back in Austria, via Skype. Markus took the laptop around to each of his tour mates, allowing each of them to say hello and chat briefly with his wife.

When Mrs. Reuter spoke to Tony Levin, she made it clear how much she missed Markus, imploring Tony to “take good care of him” on the tour. Tony smiled and thanked her for the use of her husband for the tour. He then playfully assured her, “I take good care of him. I play him quiet, soothing music every night before bed!”

A Drain Below
While Adrian Belew was setting up his system (the centerpiece of which is his Signature Parker Fly MIDI guitar), one of the other players mentioned to him the stories-high sign on the building’s exterior. It name-checked many of the well-known artists who had graced the Bijou’s stage. They all had a chuckle, noting that his name had been spelled Adrain [sic] Belew. From there, the conversation devolved into silliness, with band members subjecting their names to wordplay. The clear winner of these was A Drain Below.

Spontaneous Percussion
Once Pat Mastelotto got his drum kit set up, one of his fellow players – I can’t recall which now – came over to him and made eye contact. Pat started clapping out a beat: one of those impossibly tricky time signatures one finds on some King Crimson songs. I dunno: 12/7 or somesuch. This other player proceeded to add a sympathetic clapping beat to that. Wordlessly, Power Trio drummer Tobias Ralph joined in. The result was a no-words, no-drums “prog rock drum circle.” It went on for a few minutes. I wish I had recorded it or taken a photo.

That Was No Lady
Once all the band members were set up, and immediately before sound check began, Adrian Belew’s wife came onstage and slipped some cash into Adrian’s pocket. (It looked like a $20 but I can’t be sure. Spending money for dinner is my best guess.) She proceeded to approach each of the other five members — each busy and preoccupied to varying degrees. She was trying hard not to draw attention to herself, and she clearly didn’t want to disturb the musicians while they were setting up. 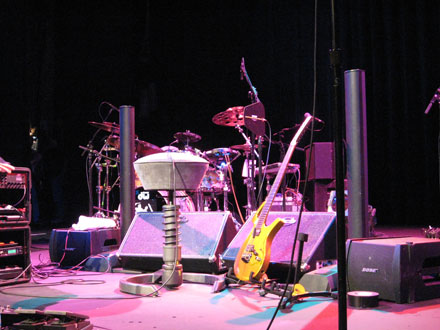 She gingerly approached Tony Levin from behind, silently stuck a bill into his pocket, and quickly retreated. Tony jumped a bit and joked, “Who was that lady?” Not missing a beat, Adrian quoted the old vaudeville line: “That was no lady. That was my wife!” Laughs all around.

We’re Gonna Need a Bigger…Marquee
At the tail-end of my interview with Adrian, Pat and Tony, I asked Tony Levin what it felt like to be the only non-billed member of the touring Anderson Bruford Wakeman Howe group in the late 1980s. For him, it’s about the music. “I don’t care about the billing at all,” he shrugged. “My mind was occupied on that tour by trying to fill the shoes of Chris Squire, without sounding like a guy who’s just copying Chris Squire.” Adrian Belew waggishly added, “There was no room left on the marquee for his name, anyway!” Pat Mastelotto chuckled, “You should’ve seen the posters when the tour was Tony Levin, Allan Holdsworth, Terry Bozzio and me. ‘Mastelotto Bozzio:’ that’s a lot of fuckin’ o’s!” 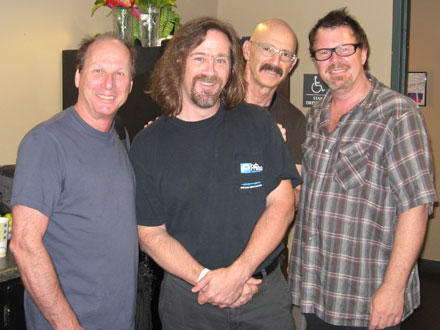