The Men (and Woman) Who Would Be King (Crimson): The Two of a Perfect Trio Tour (Part Two)

In Part One I laid out a potted history of King Crimson, with an emphasis on how that chronology led to the current Two of a Perfect Trio tour featuring Adrian Belew, Tony Levin and Pat Mastelotto. When we left off, the players were explaining the tour’s origins.

“And,” Pat Mastelotto adds, “it seemed pretty obvious that with the two trios double-billed, we could bring everybody out. We were lucky when the ‘kids’ (Julie Slick and Tobias Ralph) came up while we were doing the camp, So we got a little bit of rehearsal in.” (“That’s the only rehearsal we had,” Adrian Belew interjects.) Owing to “a bunch of visa issues,” Markus Reuter wasn’t present for those rehearsals. 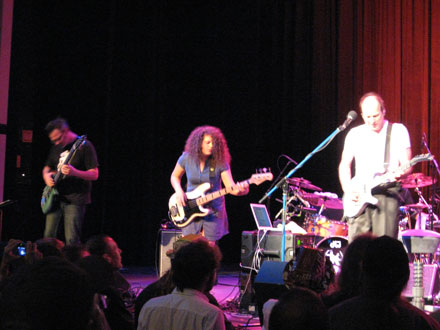 Pat Mastelotto doesn’t see a huge difference between the drumming style he brings to progressive works like King Crimson’s “B’boom” and the technique he uses on more pop-oriented material for other artists. “I’m the same guy,” he says. “I was listening to King Crimson when I was 12, 13 years old. It’s [about] the song and the material,” he says, giving an example. “There used to be this thing called a record store,” he laughs. “And you used to think, ‘Where is this record going to sit?’ So if I go work for an artist that I don’t know, I think, ‘does she want to be next to Bjork or Sheryl Crow?’ So,” he continues, “it wouldn’t be appropriate to play some of the things we do in Crimson in a pop band.”

Still, there’s overlap in terms of influences, and that pervades Pat’s work in interesting and unexpected ways. “There’s a Mr. Mister song, ‘Kyrie,’” he notes, referring to that band’s 1985 Billboard #1 hit. “The drums don’t come in [for a while] and then they bash in. That’s a Crimson thing. That’s the influence of being a kid listening to Crimson, a band that wants to scare ya,” he laughs.

“I’m silly enough,” reflects Adrian Belew, “that even when I was a kid listening to music, [I thought] that avant-garde tastes and pop music tastes were compatible. I listened to Stravinsky at the same time as I listened to the Beach Boys. To me, it could all go together somehow, and that’s what I’ve always tried to do.” 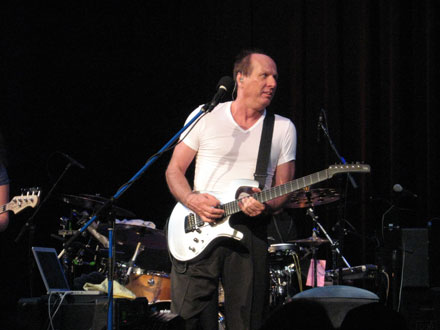 “Although,” Belew continues, “Sometimes you do — for the listener at least — separate it out a little bit for the listener, to make it clear for them that, ‘This is what this record is about, and this is not what that record’s about.’”

Speaking of Stravinsky, in concert Stick Men often play an arrangement of “Firebird Suite” that is both faithful to the composer’s intent and decidedly modern and heavy. The Chapman Stick plays a large role in that. Though the instrument is not well-known and is still thought of as exotic, Tony Levin has been working with the Stick for thirty-five years. “I got it in 1976,” he recalls. Tony quickly gained proficiency on the Stick: “It’s very different [from bass] but I didn’t have a hard time with it, because I played the bass with a tapping technique before I got the Stick.” Four years later, he brought it to King Crimson. There “it seemed to come into its own,” he says, “because King Crimson seemed like the right setting for that sort of progressive instrument.” 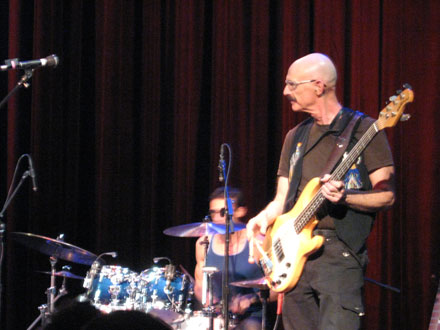 “I’ve played a lot of different styles of music,” says Tony. “And I approach the music and play what’s appropriate. I don’t think about trying to bring one style into the other. But,” he adds, “I don’t even think intellectually about the music. I just listen to it, and play what seems right for it. Except for classical, where I play what it says on the page,” he laughs.

In the later configurations of King Crimson, Robert Fripp’s role on record increasingly took the form of an atmospheric style, one closer to his Soundscapes projects than to the bruising, metallic shards of sound found on, say, 1974’s Red. When the six players on the Two of a Perfect Trio tour convene onstage to cover classic Crimson material, Adrian Belew says that the arrangements are “pretty close” to the originals. “We did a little bit of editing on ‘Frame by Frame’ and ‘Dinosaur’ and so on. Markus kind of takes over Robert’s parts whenever needed.” Reuter ably handles what Belew characterizes as “some of the fast running lines, and some of the Soundscape-type things.” 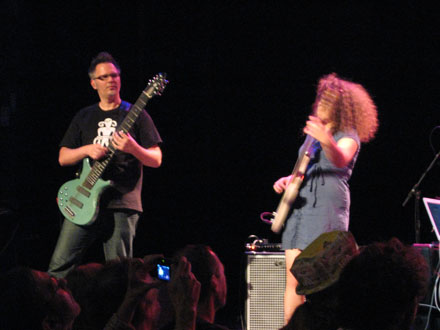 “I was already playing – in the Trio – six or seven King Crimson songs,” Adrian says, “So I had already pared them down a little bit.” He chuckles inwardly and notes that “They sound a lot better this way; ‘Dinosaur’ is back to where it should be.”

Our conversation took place backstage at the Bijou Theatre in Knoxville TN, the third night of the Two of a Perfect Trio tour. Sound check – open to VIP ticket holders – was brief and allowed little in the way of fine-tuning. “I look forward to the day when we get to do a big, long sound check,” says Belew. With long drives between gigs most days on this tour, that day may not come soon. 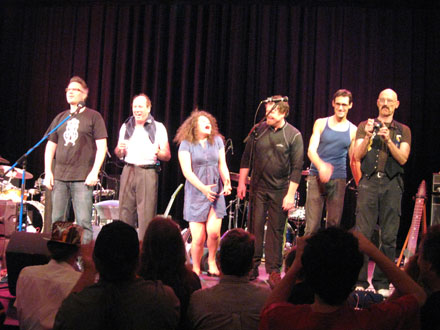 On the subject of live sound mix quality, all three players agree that they haven’t paid much attention to technological advances; to a man they believe that the room often has more to do with the sound quality than anything else. (Most would agree that the Bijou is a good room.) And in the end, the players onstage have the most influence over it. “I remember when I saw Jimi Hendrix,” Pat Mastelotto recalls. “He had Billy Cox [on bass] and Mitch Mitchell [on drums]. You couldn’t hear a note of Mitch Mitchell; all I heard was guitar. But the act before them was Buddy Miles. And I heard every fuckin’ note of the drums. So it impressed me as a kid: ‘Oh, that’s the way a guy cuts through so you hear him in the house.’”

For the Two of a Perfect Trio tour, the combined groups reach back into the King Crimson catalog, often performing “Red” and selections from Discipline and Beat. “A lot of what we’re trying to do here,” Belew says, “is [VROOOM and THRAK era] double-trio material, because we finally have that instrumentation.” After the Power Trio set, another trio (Belew, Levin and Mastelotto) comes out and does “Three of a Perfect Pair” and “Sleepless.” Then they’re joined by Markus Reuter, covering Fripp’s parts and creating an alternate version of the 80s Crim lineup. Finally, they’re joined by Julie Slick and Tobias Ralph for the double trio material. 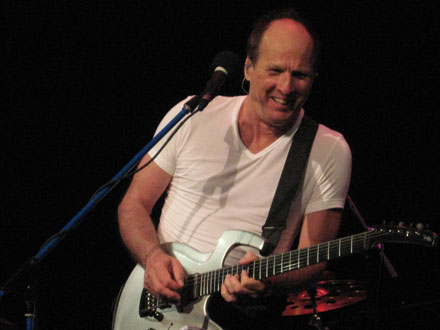 So — again – is this endeavor King Crimson, a ProjeKct, or something else? Belew gamely attempts to unpack the issue. “The new Jakszyk, Fripp and Collins album, A Scarcity of Miracles, which Tony plays on – that’s a ProjeKct. We don’t call this [tour and configuration] a ProjeKct. As far as I’m concerned, I’ve been in King Crimson for thirty years — Tony has, too – and it’s a celebration of that. But it’s not a ProjeKct, and we’re not necessarily planning on putting out any records or anything.” So for fans – of King Crimson and/or of one or several of the players involved – this Two of a Perfect Trio tour is a rare opportunity to witness this musical spectacle. The final date on the tour is scheduled for Asheville NC’s annual Moogfest festival, October 28-30.

On the subject of King Crimson itself — whatever that name means in 2011 – Belew offers an update. “I’ll tell you what I know. Robert [Fripp] has talked to me a few times, and he’s said that for the next two years at least, he’s going to be dealing with litigation. [He’s] trying to get money owed to him, and he doesn’t have the time to concentrate on music. So for at least the next two years, he has said to me, ‘I’m not going to be doing music.’”

“Right after he said that,” Belew adds with a laugh, “they put out the new Jakszyk, Fripp and Collins album! So, I don’t know. We just wait around and find out.”

You may also enjoy this collection of vignette-style anecdotes from the TOAPT tour. — ed.