DVD Review: The Ballad of Mott the Hoople 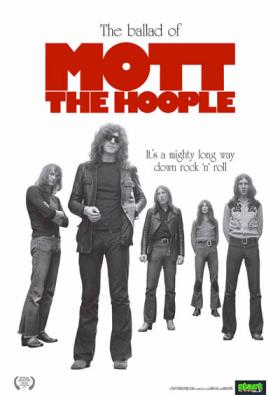 Mott the Hoople are one of those bands from the 1970s that are often tarred with the epithet “second string.” Neither purveyors of a long series of mega-hits nor (quite) one-hit wonders, the British band produced a string of albums, each with its own charms. The group is most well-known for a song it didn’t write (David Bowie’s “All the Young Dudes”) and a visual style (glam) not fully representative of the band’s true aesthetic.

As such, Mott the Hoople is oft-overlooked when surveying to rock landscape of the 70s. A new documentary The Ballad of Mott the Hoople sets out to right this wrong. With cooperation of all surviving members, the film is a fast-placed, comprehensive portrait of the band that is loving and irreverent, sad and funny, subtle and direct.

Making extensive use of both archival footage and contemporary interviews, The Ballad of Mott the Hoople traces the group’s start, giving proper emphasis to the important role played by would-be svengali Guy Stevens. Much useful perspective is offered by Stevens’ widow as well as by Mainman mainstay Leee Black Childers and a few others.

But it’s the unalloyed, honest perspective of Ian Hunter and his band mates that help The Ballad of Mott the Hoople to rise above a Behind the Music-type project. The filmmakers deftly weave vintage footage (home movies, promotional film, concert footage) onto the screen as the original band members provide their unique points of view.

Even hardcore Mott fans (are there such people?) will find much they haven’t seen before. The quality of the music – and there’s lots of it in The Ballad of Mott the Hoople – is such that a viewer may well find him- or herself thinking, “wait, wasn’t that one a hit too?”

In fact the film gives off the feeling that Mott the Hoople is every band, that the experiences its members endured are – at their core — the same sorts of things that every band has faced. Perhaps it’s the down-to-earth demeanor of the guys in the band, but their working class demeanor seems worlds away from any sort of rock star attitude.

In addition to a full chronicling of the band’s ups and downs, The Ballad of Mott the Hoople touches on the group’s celebrated 2009 reunion. In terms of its narrative arc, the film is not wholly dissimilar to New York Doll, a biopic about Arthur “Killer” Kane. But there’s less drama, less disaster and more conventionally tuneful music to be found in The Ballad of Mott the Hoople. Recommended.