Book Review: The Stooges – Head On 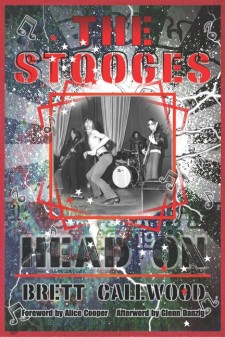 There are a few characteristics that – when present – enhance the quality and readability of a book. When the subject is a band, figure or personality in the rock idiom – though in fact this is something of a global truth applicable to much more than rock music – if the author has an angle, a point of view that’s fresh or somehow unique, that can help the book to no end. Further, a little bit of controversy rarely hurts: if the author can set forth a provocative assertion or two, that can get people talking.

Brett Callwood seems to understand these truths. His new book (and by new I mean expanded, edited and revised from a 2007 book published only in the UK) The Stooges: Head On takes a look at one of Detroit’s (and the world’s, for that matter) most notorious and legendary bands.

But from the beginning of the project, Callwood’s approach would be different. He knew that plenty of ink had been spent already covering Jim Osterberg a/k/a Iggy Pop. He knew that a perhaps inordinate part of that ink covered Iggy’s time in Berlin with David Bowie. Callwood had little interest in retracing the steps of authors who had gone before him.

Because, you see, Callwood is a fan of the Stooges, of the band the Stooges. This meant not only that his interest expanded beyond the colorful front man to the musicians in the band, but that as an author he would seek to bring balance to the story from his point of view.

So with Head On, readers get a book that gives equal – if not the preponderance of –weight to the lives, stories and (where available) perspectives of the Asheton brothers Scott (drums) and Ron (guitar). And, taking care to point out and explain the difference (as he and many fans see it) between “The Stooges” and “Iggy and the Stooges,” Callwood goes in successful search of James Williamson.

All this means that Head On approaches the Stooges saga as having several mileposts upon which to hang a tale: the group’s origins; the first self-titled album; Fun House; the semi-dissolution of the band; Raw Power, and the 21st century re-formation(s) of the band(s).

But Callwood doesn’t stop there. After starting out by chronicling the young pre-Stooges lives of the members (especially the Ashetons), he moves into the main Stooges story. But rather than treat the work that Ron Asheton (and to a lesser extent his brother Scott) did post-Fun House in a cursory manner, Callwood dives into this period in detail. And he does so in a way that weaves those stories into the main narrative. What could have come off as a series of tangents instead reads as another important angle of the overall story arc.

Musically, the New Order and Destroy All Monsters (to name two of several projects with Asheton involvement) had perhaps little in common with the Stooges beyond some personnel overlap. Indeed, the skill set that Ron Asheton brought to these bands often required something different of him than had the Stooges records and shows. But especially since those bands’ histories interweave the stories of other Detroit music legends (including a pair of ex-MC5 musicians), their coverage in Head On makes plenty of sense.

The second quality that can help a book – controversy — is here as well, but perhaps not in the form one might guess. Rather than focus on the Stooges’ onstage antics and debauchery (refreshingly, the generally over-covered subject of peanut butter is mentioned hardly at all in Head On, by the way), the controversy is this: Callwood asserts – both implicitly and explicitly — that the Stooges somehow rose from the mists fully developed; that they bore and displayed little if any influence from other musical acts. Callwood seems to be trying to sell readers on the idea that the group’s elemental approach, their rudimentary mastery of their instruments – meant that they were originals, true and pure. Influenced by no one, Callwood would have us believe, the Stooges went on to influence generations of other musicians.

I’m not at all sure that I’m completely buying that assertion, but Callwood does a yeoman’s job backing up his argument. And whether one believes that the Stooges owe nothing to their forebears, Callwood deserves props for going out on a limb to make the argument.

In this revised/expanded edition, Callwood tells us that he has cut a good bit of his own personal odyssey out of the pages, adding in instead material gleaned from eleventh-hour interviews with the principals. Still – and especially near the book’s beginning and end – Head On is a personal story, one that benefits from the perspective of its author.

A few minor criticisms do merit mention. I don’t know if it’s a British thing – I’ve seen it in other recent books by UK authors – but I do take issue with the technique of including long and seemingly unedited quotes from interview subjects. My issue isn’t with the shift in perspective; it rather has to do with inconsistency. Now, when we speak, we often drop asides and parentheticals into our conversation. Sometime we circle around our point, fail to make it, try again, and succeed. That’s all well and good. But if that speech is presented verbatim in print, it can make for some odd and not especially illuminating reading.

To wit: when Destroy All Monsters member Niagara relates first seeing The Stooges, she starts out saying, “I was in eighth or ninth grade.” At the tail end of the same quote, a mere hundred words later, she says, “I think I was in tenth grade.” A more careful writer or editor would have gone back and nailed down which-is-it, or pared it down some other way. Note that this is but one example of a problematic thread that runs through the book. Callwood can – and does – write well. Many of his interview subjects, however, cannot and do not. Readers are subjected to their unedited verbiage nonetheless. The result is a ride that’s bumpier than it needs to be.

Still, Callwood has done history and music a great service by researching and writing Head On. He’s wholly successful at one of his stated primary objectives: to present the story of the Stooges as the story not of Iggy and his pals, but of Iggy and the Ashetons, Dave Alexander, James Williamson, Mike Watt, Scott Thurston and Steve Mackay. For that alone — though its other virtues are many — Head On is worth reading.