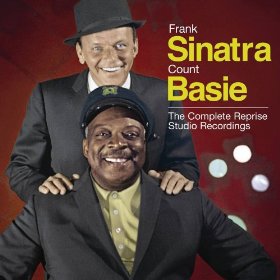 Hell, I don’t know how many Frank Sinatra albums there have been. Not counting compilations — and there have been scores of those – Sinatra’s voice graced something like sixty long players. His style developed, refined, improved (and then solidified toward the end of a long and illustrious career); highlights are many, and any given listener’s favorites might include his work on Capitol or Reprise; his Vegas era; his romantic ballads; his saloon songs; or his swaggering, swinging big band work.

It’s the last of those than I enjoy the most from Sinatra. Once he got his own label (Reprise), Sinatra began to focus on thematic (if not conceptual) albums, which made sense: the album only came into its own as a medium around that time.

In 1962 Frank Sinatra had few peers; though he worked (and would continue to work) with an amazingly talented string of arrangers and bandleaders (Billy May, Neal Hefti and Quincy Jones to name but three), none of these asked for (or received) equal billing. Though Sinatra was always generous with credit, making a point in concert to note whom was responsible for a song’s arrangement, his name was always at the top of the marquee.

A pair of notable and worthy exceptions to this rule was the two long players Sinatra recorded with pianist/bandleader Count Basie. The pair worked together on Sinatra-Basie: An Historic Musical First in 1962, and then again in 1964 on It Might As Well Be Swing. Basie’s piano work, his band and orchestra can’t really be said to be backing Sinatra on these recordings; the music is very much a pairing.

Combined on a single disc in 2011, together these two records are now titled The Complete Reprise Studio Recordings (so titled since they also did a live album, not included here).

A hallmark of Basie’s arrangements was his brief, understated solo piano intro. That technique is used extensively on Sinatra-Basie. Possessed with a keen understanding of band dynamics, Basie developed arrangements that started quietly and built to a crescendo. Against that backdrop, Sinatra employed a similar approach, starting quietly and following the best; as the songs unfolded he’d build the energy and loosen his vocal approach.

The song selection is weighted toward songs that benefit from the powerful, inventive Basie arrangements, yet the chairman’s voice is always front and center. Basie’s band and orchestra engage in what is best described as a musical dialogue; it’s never a competition. If there were a way to separate the vocal and instrumental channels on these songs, both would be equally thrilling. The combined effect is peerless.

Expert use of stereo is a hallmark of “(Love is) The Tender Trap.” Not among Sinatra’s most well-known songs, the song benefits from wide stereo back-and-forth between brass parts, with Sinatra’s voice squarely in the middle. An uptempo reading of the romantic “I Only Have Eyes for You” show a different side of the song than other versions. The brief “I’m Gonna Sit Right Down and Write Myself a Letter” is the closest things to an all-instrumental number, and it points out that even though Sinatra was an unparalleled vocalist, he knew when not to sing.

On It Might As Well Be Swing, Sinatra and Basie crank out a spirited tribute of sorts to Louis Armstrong in “Hello, Dolly!” And Basie’s fine barrelhouse playing finally gets a bit of spotlight on “I Wanna Be Around.” But the highlight is that record’s opener, a spirited run-through of “Fly Me to the Moon.” It showcases both the power and subtlety of both men’s work.

Though ostensibly a big-band outing, It Might As Well Be Swing features a lovely string-centric arrangement on “I Wish You Love.” And while the film Mondo Cane isn’t especially memorable, the Sinatra/Basie reading its theme “More” is a showstopper. If a song ever cried out for key modulation, this one does (and it gets it, along with a Big Finish). A cover of “I Can’t Stop Living You” is taken here as a country-flavored nod to Ray Charles, and for once Sinatra’s vocal choices seem overly mannered: it’s a rare misstep.

The strings swing on “The Good Life,” another prime example of the musical dialogue, the equal give-and-take that’s found across the twenty tracks collected on The Complete Reprise Studio Recordings. The whole affair wraps up in style with “Wives and Lovers.”  Even with its horribly dated sexist lyrics, it’s a fun number in the hands of this pair of experts.

While this 2011 compilation doesn’t include bonus tracks, it does bring together an enjoyable and illuminating set of interviews and essays in its enclosed booklet. Stan Cornyn mercifully dials his hipster prose way back in a 1964 interview with Quincy Jones, and Bill Dahl’s 2011 essay places the pair of sessions in context for the modern listener. Dahl sums it up best with the last four words of his essay: “Let the swinging commence.” Indeed.