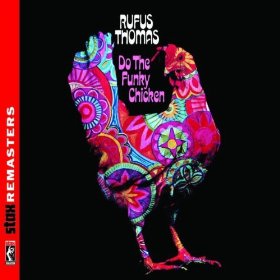 It’s easy to dismiss the work of Rufus Thomas (the world’s oldest teenager™) as the work of a novelty artist. Too easy, in fact. And it does a disservice to some great music. But Rufus didn’t exactly help matters by recording and releasing songs that all but forbade you to take him seriously. Anybody who shouts “I feel so…unnecessary!” in the middle of a song can’t expect much in the way of serious musical credibility. That’s especially true if the song in question is the title track on an album called Do the Funky Chicken.

But here’s the thing: though we don’t know the full roster of players on these songs, we do know that it’s some funky music. Playing with verve and wit, Michael Toles (called out by name repeatedly throughout the record’s eleven tracks) turns out some finger-lickin’ good guitar licks. And whoever the horn sections is — maybe the Memphis Horns, maybe not – they’ve got it going.

This is party music, plain and simple. Don’t look for deep philosophical intent on these tracks. Classic covers like “Sixty Minute Man” are sometimes treated in a bizarre manner; on that track Rufus spouts vocal gibberish over a slow funk riff; the effect is a sort of late-sixties take on Cab Calloway. But on “Lookin’ for a Love” he takes things a bit more straightforward. And even when Rufus is being goofy, the band and backing vocalists are turning in tight performances.

A recut of Thomas’ shameless Elvis ripoff (originally cut for Sun Records!) “Bear Cat” features an arrangement updated – both musically and lyrically — for the sixties, and it’s wholly effective. It’s a piece of fluff to be sure, but a delightful one; listen to it and try not to smile.

Even six-minutes-plus of “Old McDonald Had a Farm” works. Try to forget it’s a nursery rhyme; instead, enjoy the loose call-and-response vocals and electric clavinet work. The blues-meets-big-band “Soul Food” is a more literal Rufus-style rethink of “Memphis Soul Stew.” And “The Preacher and the Bear” weds Chuck Berry’s style to the Stax sound.

The 2011 Stax remaster adds eleven bonus tracks; for these, more personnel info is available. We know that Booker T & the MGs are on some tracks (no surprise there), as are the Memphis Horns, the Malaco Rhythm Section and the South Memphis Horns. And Steve Cropper produced a few; again, no surprise there. The highlight of these is a reading of Eddie Floyd’s “Funky Mississippi,” taken straighter and funkier that the more comedy/party-oriented tracks. “I Want to Hold You” leans in an Otis Redding direction. A pair of two-sided singles (“Itch and Scratch” and “Boogie Ain’t Nuttin But Gettin’ Down”) are tight James Brown-styled dance party grooves; like much of Rufus Thomas’ work, they’re about doing the latest (manufactured) dance craze.

And that’s enough, really. With no great aspirations toward great art, Do the Funky Chicken and its bonus tracks is a collection of fun music. (Rob Bowman’s contemporary liner notes impart plenty of information while striking just the right tone.) Look elsewhere for the serious stuff, but when it’s party time, Rufus Thomas can be counted on.