CD Review: The Dramatics – Whatcha See is Whatcha Get 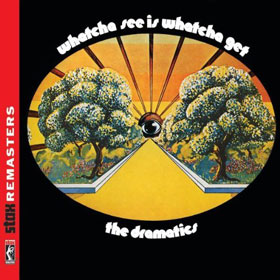 Though Stax/Volt was (and will remain) closely linked with its hometown of Memphis, not everything that came out on the legendary label was Memphis-based. Some of it wasn’t even recorded on McLemore Avenue. Some artists worked out of Muscle Shoals AL, and some were from even farther afield. The Dramatics, for example, were from Detroit. This vocal group enjoyed an impressive string of hits in the early 70s. With something of a revolving-door lineup across that period, the Dramatics nonetheless created enduring and influential music.

In terms of quality, 1971’s Whatcha See is Whatcha Get ranks at or near the top of the group’s efforts. The record opens with the literally screaming intro of “Get Up and Get Down.”  The song quickly settles into a rubbery groove that features multiple vocal turns from each of the group’s five singers. Soaring strings, beefy brass and funky lead (and rhythm) guitar lines transform what (on paper) looks like a song that goes nowhere (technically speaking, it’s little more than a two-chord workout) into something majestic, something that’ll move you to do what the title says. As a single, the track made #79 on Billboard’s Hot 100, and it soared to #16 on the R&B charts; the Dramatics had crossover power.

The smoother sounds of “Thankful For Your Love” were a bit more standard, but Johnny Allen’s peerless arrangement does the same duty: though all of the songs on Whatcha See is Whatcha Get (written by producer Tony Hester) are sturdy compositions, the arrangements – instrumental and vocal – make them more than they would otherwise be. The slow jam “Hot Pants in the Summertime” certainly boasts a dated title and subject matter, but musically it stakes out territory between Sly & the Family Stone and the more traditional Four Tops-type sound.

It’s hard to imagine a more effective piece of music in this genre than the title track. With hints of everything from Latin/salsa to rock, to R&B, pop and funk, the song even presages disco. Musically dynamic but nailing down a steady groove, “Whatcha See is Whatcha Get” showcases the Dramatics’ vocal prowess, setting it against a primordial guitar riff. The song displays judicious use of horns; you’ll actually look forward to the recurring riffs coming back around so you can punch your fists into the air along with them. This monster hit made it to #9 on the mainstream chart and #4 R&B in 1971.

A study in contrasts, the title track is followed by “In the Rain.” Featuring the heavily echoplexed guitar work of legendary Detroit sessioner Dennis Coffey, “In the Rain” is a shimmering song of heartbreaking intensity. Three decades later, fellow Detroiter Mayer Hawthorne would revive this style – happily citing his influences — on his debut album A Strange Arrangement.

“Gimme Some (Good Soul Music)” is another entry in the popular “Let’s do a song about a song” subgenre, but it’s effective as an album track. “Fall in Love, Lady Love” is a relatively standard romantic sweet soul number, but again, it’s elevated by its arrangement. Some intriguing synthesizer work further enlivens the funky album closer “Mary Don’t Cha Wanna.”

On its most recent Stax/Concord reissue, Whatcha See is Whatcha Get is curiously appended with “bonus tracks” that more than double its length. What’s curious is that these bonus tracks are actually A Dramatic Experience, the group’s 1972 followup album, presented here in full. So what we really have here is a twofer, though oddly it’s not billed as such.

A Dramatic Experience represents an even more ambitious approach for the group. Calling the record a concept album might be overstating things, but no less than three tracks deal with the scourge of drugs in the inner city (the disc was originally to be called The Devil is Dope). Soul/R&B isn’t the first genre that comes to mind when thinking of concept albums, but A Dramatic Experience is up to the task. Featuring the same level of quality and attention to detail on instruments and vocals, the album is a consistently engaging listen. In fact it works a bit better as a whole.

It’s not all heavy messages, though: tracks like “You Could Become the Very Heart of Me” are catchy soul numbers. “Fell For You” – with its insistent horn figures contrasting with an almost cocktail-lounge arrangement — was a hit (#45 on the Hot 100, #12 R&B). But songs like “Jim, What’s Wrong With Him?” and “Beware the Man (With the Candy in His Hand)” lean more toward the sound Curtis Mayfield and Isaac Hayes showcased (on their respective Superfly and Shaft soundtracks). “Hey You! Get Off of My Mountain” borrows its subject matter from a similarly-titled song by a five-member group from England, but it’s fun nonetheless.

A minor mystery is appended to the 2011 reissue. Previously issued as bonus tracks on the 1990 CD version of A Dramatic Experience, the song “Stand Up Clap Your Hands” sounds as much – if not more — like a mainstream hit as anything else on this CD.  The mystery is this: apparently nobody knows who wrote the song, and the publishing credit is also unknown. Sporting a more rocking arrangement, “Stand Up Clap Your Hands” sound like a lost Rare Earth song, but with the Dramatics taking the vocals. And “Hum a Song (From Your Heart)” sounds like Sly’s band again, but with a young Michael Jackson (crossed with Smokey Robinson) -sounding lead vocals.

The liner notes for the reissue are lifted from a pair of facing pages in Rob Bowman’s weighty and essential tome Soulsville U.S.A.: The Story of Stax Records, adding a couple of “for my money” phrases onto both ends to no great effect.

Anyone interested in the history of Stax/Volt needs this album. Anyone who enjoys Detroit soul of the 70s needs it as well.