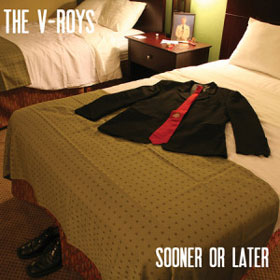 I don’t go much for country-rock, especially when it’s outfitted in the all-hat-no-cattle trappings of modern Nashville. But when it’s an authentic distillation of the best of the two genres, I can dig it.

And I can dig the V-Roys. Sure, I missed them on their original go-round, in the late 90s when they released a pair of studio albums (Just Add Ice in 1996 and All About Town three years later) and a 2000 live album. I wasn’t the only one who missed them, but plenty of people did notice them, and while comparing their under-the-radar, slow-burn influence to that of, say, Big Star might be overstating things a bit (too early to tell, really), plenty of alt-country acts seem to be mining the vein the V-Roys started.

A new compilation sets out to place their music in some historical context, and conveniently make it available to a wider universe of potential listeners. What might have been a tad ahead of its time fifteen years ago now sounds fresh and timeless at the same time. Sooner or Later is a fitting title for this music. The eighteen-track CD surveys both of the studio releases, dropping the lesser tracks and folding in unreleased covers and originals.

To be sure, this isn’t straight-ahead rock through and through: the ¾ twang of “Pounding Heart” has much more in common with classic country than classic rock, but the lead guitar lick has just a bit of distortion, suffusing it with rock ‘tude. And the song “Sooner or Later” – vaguely reminiscent of a well-known song from Blues Traveler – will resonate with anyone who ever enjoyed Gin Blossoms (or the better efforts of John Mellencamp). Like all of the tracks on the set, it has a deeply authentic/no-bullshit vibe. “Goodnight Loser” suggests what the Eagles might have sounded like if they weren’t (“reportedly,” suggests our legal department) such a bunch of douchebags.

“Lie I Believe” sticks to that intimate feel; it’s sort of a cross between a campfire ballad and a rock tune; very effective. And a cover of Neil Young‘s Buffalo Springfield-era classic “Burned” is effective, building the arrangement around a stomping drum figure and dropping the original’s rickety, out-of-tune saloon piano.

The songs from All About Town display a bit more polish and ambition in terms of arrangement; “Amy 88” benefits from the treatment, with honking horns, reverbed guitar lead and handclaps. But the track is over too soon! “Over the Mountain” applies alt-country style to a melody straight outta Dublin, and it works.

The previously-unreleased tracks – and there are five of ’em here – are every bit as fully formed (songwise) and finished (production-wise) as the reissued cuts. An understated cover of Tom T. Hall‘s “How I Got to Memphis” is reminiscent of a cross between Foster & Lloyd and Old 97s; how could that not be good? The vibe of “Hotel Room,” on the other hand, crosses twangy alt-country with The Replacements. The loosest track on Sooner or Later is a reading of the Leiber-Stoller chestnut “Smokey Joe’s Cafe.”

The set closes with an irreverent cut from the group’s debut, “Cold Beer Hello.” The goofy sing-along is note-perfect for C&W fans, with its wry refrain. But its rough edges – including an intentionally (and painfully so) off-key guitar solo, speaker buzz, fret scrapes and the actual sound of twelve-ouncers being opened – would have kept this one off the radio. It’s essential despite those elements. Or maybe, in part, because of them.

The bad news is, of course, that The V-Roys packed it in at the close of the 20th century. The good news is that Sooner or Later documents a brief career that showed a great deal of promise. You probably missed The V-Roys when they were together. Time to remedy that oversight.