CD Review: June and Jean Millington – Play Like a Girl 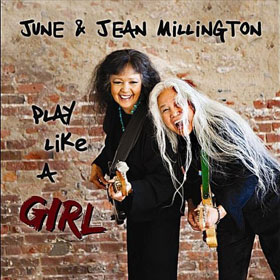 Fanny was a remarkable band for any number of reasons. As the first high-profile all-female rock band – band, I say, as in they sang, played and wrote – they earned a notable place in rock history. That they were good — irrespective of gender – makes them all that much more important. Sisters Jean and June Millington formed and led the band through a string of popular albums in the early 1970s. Though June left by 1974, the band persevered for a bit longer (albeit with diminishing commercial and critical returns). Their albums were long difficult to locate, but a 2002 four-disc CD (First Time in a Long Time) remedied that, and served up rarities as well.

Fast forward to 2011. The Millington sisters have recorded a new album (under their own names, not, it should be noted, as Fanny) titled Play Like a Girl. Since well more than three decades have elapsed since Fanny’s heyday, it should come as little surprise that Play Like a Girl doesn’t rock the house quite like in the old days.

A couple of ingredients that made Fanny successful are lacking on Play Like a Girl. Chief among these is the assertive keyboard work of Nickey Barclay. The vocal arrangements – featuring all four musicians providing strong vocals – gave Fanny’s songs a distinctive, assertive edge.

While Fanny turned out many impressive original numbers (“Charity Ball,” to cite one example of many), some of their strongest numbers were covers, including excellent and original reworkings of songs from Cream (“Badge”) and the Beatles (“Hey Bulldog”). Play Like a Girl features all original songs.

The rocking title track is commendable, and it does indeed rock. No less than three styles are rolled out on the guitar: pig-squeal lead, slide guitar and twin-lead – and all are tasty. But the lyrics are a bit obvious. Boxy production – some might call it “intimate” – detracts from the finished product.

“I Love Your Hair” is a self-referential song that may resonate with middle-aged women in need of a dose of Grrl Power, but other listeners might find the lyrics borderline cringeworthy. The growling vocals feel a tad too earnest as well.

Play Like a Girl’s spare production aesthetic works quite well on “Let Love Linger.” Sultry vocals and a funky vibe recall Fanny’s best work. The assured instrumentation – Jean on slapping bass and June on guitars — shows why they were in-demand session players back in the day. Three songs in, Play Like a Girl seems to have hit its stride.

June recreates the guitar sound of the original version of “Badge” (not the Fanny version) on “When You Bottom,” which — while being a bit oblique lyrically — is as strong as anything Fanny ever released.

“Apocalypse Deferred” would fit in well with the modern/classic rock that gets played on what remains of rock radio these days. Interesting change-ups in the arrangement as the song unfolds keep the listener’s attention, though the hooks do that pretty well on their own too.

“Calling Your Name (To the Stars)” has a fragile Joni Mitchell vibe to it; an entire album in this style would likely turn off rock listeners, but in this context it works quite well. Keeping the feel quiet for a bit longer, “Terrible Things” has an intimate, late night-bar ambience, and some nice slide guitar work suits it perfectly.

“Fall On You” (not a Moby Grape cover) heads toward Mississippi Delta country for a more-or-less one-chord workout through most of its run time. After the rocking lineup of a few songs, the energy begins to flag by this point in the disc. Yes, the songs show an impressive command of any number of music idioms, but it’s time to rawk again, ladies.

Alas, no. “All the Children” is a pensive, pastoral number with evocative lyrics. But rock it does not. “One for Change” finally plugs back in, but the unison (as opposed to harmony) vocals and the boxy feel of the record’s earlier tracks initially fails to impress. Still, when the guitars kick in – and they do indeed kick – the track takes off, in that peculiar and pleasing late-seventies arena rock way.

The disc officially wraps up with “Endless Lies,” another excursion into funky territory. The song threatens to take off, but never really does. Still, it’s successful as these things go.

A bonus track (“Opportunity Knocks”) sounds like an unfinished demo of a potential hit. Though the phrasing is similar to several other songs on Play Like a Girl (most notably the “I Love Your Hair” misfire), it combines the slightly subdued 21st century approach of Jean and June with the sonic elements that made Fanny so successful.

In sum, Play Like a Girl is a mixed bag: more than half of the disc is filled with winning songs that are arranged, sung and played in an appealing fashion. But some iffy compositions and arrangement decisions hamper the disc’s overall flow. This reviewer prefers to think of Play Like a Girl as the warm-up for something even better to come from the Millington sisters.

Note: the Play Like a Girl project was funded by a successful Kickstarter campaign.