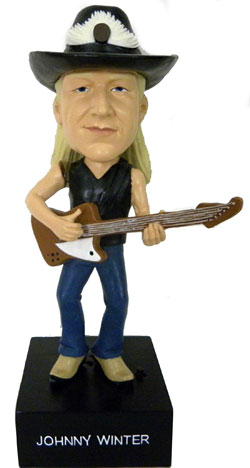 I forgot something important when I published my review of the new/archival release from Johnny Winter. A great gift idea for the JW fan who has everything, this new Johnny Winter bobblehead is pretty clever. It’s a nicely-put-together statuette of JW circa the 70s/80s, and bedsides looking very much like an accurate cartoon representation of him, it has three hallmarks of the man. One, that cowboy hat. Two, his trusty Gibson Firebird. Three, when you press a little button, an audio file plays a clip of Johnny roaring “rockandroll!!!” like you hear on so many of his live albums from back in the day.

Other stars that Seeofsound has immortalized in resin include, um, GG Allin, Andrew WK, Wendy O. Williams, Mojo Nixon, and Tesco Vee.The Johnny Winter figure is the first in their “Guitar Gods” series, and one supposes that moves things a bit closer toward the, ah, mainstream. Honestly, it’s pretty cool. Available from  Seeofsound for $24.95. And it’s a limited-edition run of 1500 units.