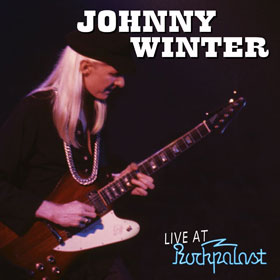 With apologies to Firesign Theatre, file this pair of releases in the Department of Redundancy Department. Not that the music and performances on Live at Rockpalast aren’t ace — they most certainly are, as is nearly always the case when it comes to fiery blues/rock guitarist Johnny Winter – but the same ground is being covered over and over.

Any Johnny Winter release – audio or video – is worth checking out. From his earliest pre-fame efforts, to his late-sixties national breakout (heralded at the time as the latest Next Big Thing), to his move toward stadium rock, to his pivot back toward straight blues, Johnny Winter’s music has always been compelling. And even in the 21st century when he’s physically frail, he turns in incendiary work on his guitar.

In the 1970s Winter was at his commercial (and some would say creative) peak. A 1979 soundstage performance for the German TV program Rockpalast captures Winter and band running through a mix of originals, classic blues and some familiar covers. Pared down to a trio, this lineup relies more heavily on Winter’s prowess as a guitarist and singer, but the rhythm section does its share of heavy lifting. Unlike, say, many live Cream performances, the air doesn’t get sucked out of the songs when the guitarist takes a lead.

The set – released on CD and DVD – gives modern fans the chance to check out Johnny Winter playing bass while his erstwhile bassist takes over on guitar. On other tracks, the sight and sound of the bassist playing harmonica while holding down the low notes is a fairly unique experience. 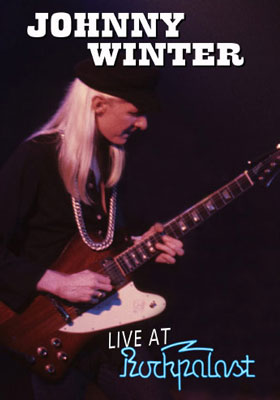 Rockpalast audiences were, by American standards, an odd lot. Here, seemingly nothing gets them excited. They may well be having the time of their lives watching Winter’s band tear through a searing version of “Messin’ With the Kid,” but they display little affect. Winter himself notices, and remarks on the seemingly indifferent reception he gets, but if it affects the band’s performance, you won’t hear (or see) it while they’re playing. Winter picks up on the fact that the crowd is more interested in his rock-oriented material, and the set balances rock and blues successfully. “If you don’t dig quality,” he comments with resignation in his voice, “at least you get off on volume.” With that, he launches into a cover of The Rolling Stones’ “Jumpin’ Jack Flash.”

A bit of care might have gone into the packaging of these sets, but alas: no. The audio version — long circulating unofficially among collectors – is certainly a welcome release, especially in light of the fact that Winter himself now shares on some level any profits the release might earn. But nowhere on the packaging are the names of the bassist and drummer even listed. Few will care, but noting the actual performance date (June 22, 1979) wouldn’t have taken any effort. And while the DVD version includes ten tracks to the CD’s seven, the compilers simply threw the DVD liner notes into the CD packaging,  confusing reader/listeners with this phrase: “…the master goes deep into the Delta, unleashing a breathtaking, 17-minute reading of Willie Brown’s ‘Mississippi Blues,’ an undeniable highlight of this unforgettable night.” Well, it’s not on the CD.

It’s also worth pointing out that three of the DVD’s performances – including “Mississippi Blues” — have already been released on an earlier disc from the same compilers: Live Through the 70s.

The sound is flawless, as expected of a soundstage performance in the home of Telefunken microphones. If you dig the rockier end of the blues spectrum, with ample and extended guitar soloing the order of the day – Live at Rockpalast is a worthwhile purchase in either format. Just be forewarned that if you’re a Johnny Winter fan, you may find some of the material overly familiar.