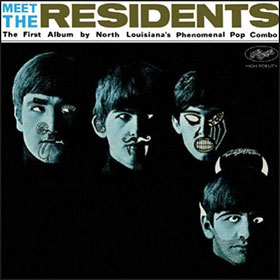 How to discern between worthless noise, a Dada in-joke, a piss-take on avant garde noodlings and a landmark work of enduring value? When the subject is Meet the Residents, it’s not an easy task. Even nearly four decades after its original release, this 1974 album – newly reissued on MVD – continues to confound. File under: uneasy listening.

If The Residents ever let us see their faces, they would likely continue to confuse us, not unlike the climactic scene near the end of The Prisoner miniseries in which Number One is unmasked. Since the group is officially anonymous and never (overtly) grants interviews, listeners are left to wonder whether these guys (and/or gals; we simply don’t know) are serious or merely mucking about.

Though the combined evidence of dozens of albums suggests the former, on their first outing, listeners (however few) could be forgiven for leaning toward the latter. Opening with a deeply twisted rendering of the Nancy Sinatra hit “These Boots Are Made for Walking” (here titled simply “Boots”), the Residents destroy the song and rebuild something much odder in its place.

On hearing this album in the 70s (or any time, for that matter) it would be easy to believe that the Residents barely had any idea what they were doing. But that belief would fly in the face (or eyeball) of the genius at work across Meet the Residents. Classical influences are combined with far-flung influences. Take “Breath and Length” as one example. In under two minutes, the song features distorted guitar and something that sounds like a sample from The Barking Dogs’ “Jingle Bells.” The sound of a piano’s innards being strummed scrapes along while some female vocals trill the lyrics in an Andrews Sisters style. The word bizarre was coined to describe this music.

“Rest Aria” is built around a slightly out-of-tune parlor piano melody, played with careful and intentional near-precision. (Though it’s quite likely that the Residents’ creative process folds in the products of mistake and happenstance, nothing happens by accident on a Residents album.) The song devolves as it unwinds: other instruments pick up the theme, each in turn rendering that theme with less and less precision. It’s akin to a lo-fi, Dada rethinking of Brian Eno’s approach on side two of Discreet Music (recorded at nearly the same time as Meet the Residents) in which he deconstructs Pachelbel’s “Canon in D Major.”

Much of Meet the Residents is designed to scare away the casual listener. Certainly that’s the effect that “Skratz” elicits over its brief 1:18 run time, featuring a spoken refrain about dirty fingernails. “Spotted Pinto Bean” offers heavily mannered female and male choruses in a call-and-response refrain, but that 1920s vibe is quickly shattered by jagged shards of noise. Listening to the song feels a bit what it might be like to walk through a carnival funhouse populated with sinister and disturbing characters; this track – perhaps more than any other on Meet the Residents – sets the tone for much of the outfit’s subsequent work.

“Infant Tango” starts out with an almost funky vibe, but quickly devolves into something indescribably unnerving. Wah-wah guitars are juxtaposed against nasal vocals and imprecise horn charts. Like many of the tracks on the disc, it has the feeling of two (or more) distinct and wholly unrelated songs being performed simultaneously.

Kings of sampling ages before the term or concept were coined, The Residents inflict their brand of terror onto the Human Beinz’ hit single “Nobody But Me” in their own “N-Er-Gee (Crisis Blues).” The sounds of (a) a woman presumably reaching orgasm and (b) explosions are somehow worked into the mix. And that’s only in the first three minutes of this extended number, which might have made a fitting soundtrack for the puking-green scenes in The Exorcist.

No easier to take now than it was on original release, Meet the Residents all but defines the love-it-or-hate-it dichotomy. But if you don’t own this album and you’re up for something really adventurous, this is just the ticket. And you can always play “Seasoned Greetings” if your holiday guests overstay their welcome.