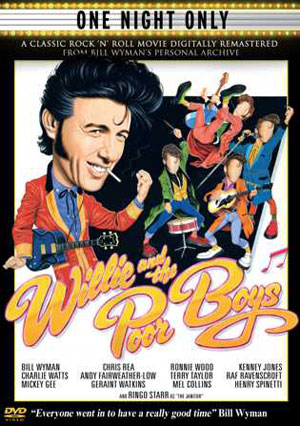 An overlooked gem is rediscovered. A 1985 LP that went largely unnoticed on its release, Willie and the Poor Boys was an exercise in nostalgia for Rolling Stones bassist Bill Wyman and a bunch of his musical pals. The LP was put together by Wyman as a means of raising funds to help out The Faces founder Ronnie Lane, then suffering greatly from Multiple Sclerosis. A major benefit – the A.R.M.S. Concert – had been mounted in September 1983, and Willie and the Poor Boys was an outgrowth of that effort, employing many of the musicians involved in the original concert.

Predictably for such a genre exercise, this busman’s holiday of a project failed to light the charts on fire, but it was clear from a listen that the participants were having the time of their lives. Running through an assortment of surprisingly rocking chestnuts from the pre-rock era, the pick-up band tore into the classic numbers. Once the album was completed, Wyman and his pals looked up and realized it was 1985. That could mean only one thing: a video would have to be made!

Originally available on then-cutting-edge VHS and Beta for the low low price of $19.95, Willie and the Poor Boys (the video) depicts the fictional band set up on a gymnasium stage, regaling an audience of young, period-garb-clad youths. The band mimes to eight numbers from the record, giving each of several vocalists a turn at the lead mic. (The story line, such as it is, has the band’s ostensible lead singer – Chris Rea — turning up toward the gig’s end.) Wyman shows himself to be a convincing singer capable of handling the material he’s selected; he’s successful in a Ringo Starr kind of way. (Speaking of the Beatles, the 1985 edition of Wyman looks uncannily like ’85 model George Harrison; odds favor they shared a barber.)

Pianist Geraint Watkins is a show-stealer as he pounds away at the ivories while singing a couple numbers. But it’s guitarist Andy Fairweather-Low who’s the star of Willie and the Poor Boys. His winning demeanor comes through while he’s singing, while he’s playing, and in the between song shots. Viewers will be left wondering, “Why isn’t this guy more famous?” The answer is elusive, but it may have something to do with Low’s decision to position himself as a sideman-to-the-stars.

Cameos abound in the film. A very 80s-looking John Entwistle stands out among the duck’s-ass hairdos and poodle skirts. His then-bandmate Kenney Jones is seen in the crowd as well. Onstage over-emoting wildly on mimed saxophone is none other than Ronnie Wood. Drummer Charlie Watts delivers his patented leer-at-the-camera pose (you know the one) from his drum stool throughout the entire set. Other onstage notables include Raphael Ravenscroft (sax on several Pink Floyd albums), Mel Collins (King Crimson) and Henry Spinetti (drummer for Eric Clapton, among many others). Some of the band members weren’t on the actual recorded album, and some of the album’s participants (notably Jimmy Page and Paul Rodgers) aren’t in the film, but none of those inconsistencies take away from the film’s enjoyment quotient.

Everyone involved is a journeyman musician, the sort who could play these jump blues, r&b and soul numbers in their sleep. But the album’s a lively set, and the film’s visual capture it well. In fact the 30-minute video is more effective at achieving a mood than is the album.

And speaking of the aforementioned Ringo, everybody’s favorite drummer makes an appearance as “the janitor.” The scripted bits between the songs feature actors acting, and they’re well-written. The director doesn’t aim too high; there’s no grand narrative being played out. But the short scenes are colorful vignettes, and they fit seamlessly into the program, never diluting the pace of the proceedings.

A making-of documentary has been appended to the set for the 2011 DVD release (which happily has the same MSRP of $19.95, even though twenty-six years have passed). Narrated by Wyman, it’s a quickie look behind the scenes that is worth viewing once or twice. Wyman keep his voiceovers to a minimum. Lots of shots of the players smoking cigarettes and eating catered food make up the documentary’s run time, but a bit of banter between Entwistle and Procol Harum‘s Gary Brooker is enjoyable.

The DVD packaging suggests that this is some long-lost video: “From Bill Wyman’s personal archive!” screams the headline. In reality the DVD looks to be sourced from a very good (but likely not master-quality) VHS copy at best. On a regular TV it will look fine; hi-def adds nothing when there’s no def in the source material. It was 1985, after all.

Willie and the Poor Boys beats all hell out of most of that era’s video projects, thanks to the participants’ deep and abiding love for its subject matter, and the enthusiasm with which they deliver that love.