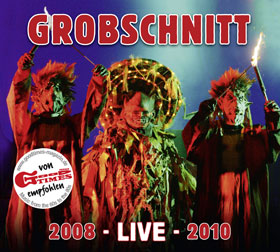 Few rock fans in North America have ever heard of Grobschnitt. Even among that group’s subset of progressive rock fans, this German band isn’t very well known. For myself, I stumbled across them wholly by accident; it’s safe to assume I would have never heard a note of their music otherwise. And that would have been a shame, because what this band offered up during its heyday was some decidedly original music.

Combining elements of the sounds one might hear on a Genesis or Gentle Giant record, Grobschnitt ran those influences through a Teutonic filter; as many rock historian/journalist types are fond of saying, the German corollaries to other Western rock were often simpler, more direct, more, er martial in their beat. (See The Rattles or the “adopted German” Monks for evidence of this). Still, a vaguely pastoral (by way of the Black Forest, one imagines) aesthetic permeates Grobschnitt’s work.

The band operated through the 1970s and 80s; the end of their time together represented the low point for progressive sounds, so that was as good a time as any to throw in the towel. But during the height of their popularity, they were known as a sort of German answer to the Grateful Dead or Bruce Springsteen. No, they sounded not a bit like either of those acts, but they did play long concerts. Really long concerts. Really, really long ones. In fact a centerpiece of many of those shows was the album-length “Solar Music” (aka “Sonnentanz”). Putting such epic-length works as Genesis’ “Supper’s Ready,” Pink Floyd’s “Echoes” and Utopia’s “The Ikon” to shame, “Solar Music” ran in excess of forty minutes.

To be fair, it’s a bit ponderous. I mean, at that length, how could it not be? The song weaves through psychedelic, prog, folk, rock and other styles, and although the tune is among hardcore fans’ most-loved numbers, they could do better.

In fact they did. The sole Grobschnitt album to be issued outside Germany (West Germany, if we wish – and indeed we do wish – to be historically accurate), Rockpommel’s Land came a bit late in the 70s prog-rock timeline (1977), but it represents the band at its best. Lyrics sung in pidgin English (by a chap calling himself Willy Wildschwein, no less) and some highly interesting musical twists and turns make that record a delight from start to finish. Fascinating work on all instruments abounds, but the keyboard and percussion work are especially tasty. Anyone who appreciates 70s Euro-prog should give Rockpommel’s Land a listen.

Owing to their legendary status in their homeland – and, perhaps casting an Eagles-like eye toward their retirement packages – Grobschnitt re-formed in the 21st century. The group always had something of a revolving cast, not unlike fellow European pranksters Gong, and the 21st century lineups drew upon some of the original members’ kids. A pair of concert recordings from recent tours has been collected on a new 2cd set called (somewhat clumsily) 2008 — Live — 2010. For anyone interested in either of the epic-length works mentioned above, this set is an ideal place to start.

2008 – Live – 2010 is worthwhile not only because one can actually find this set, but because the music is excellent. Firing on all cylinders, and with the added exuberance and precision that comes from adding younger players to the mix, these two CDs present “Solar Music” in its entirety, and all of the Rockpommel’s Land album-length suite. Moreover, on the second disc, the original Rockpommel’s Land songs are bookended with additional material that previews, reinforces and restates the musical themes found in the original work. The extra tracks are every bit the equal of the classic ones.

The first disc adds in five more songs(!) alongside “Solar Music.” Oddly, the whole thing opens with a tune called “Powerplay Finale,” but the song itself is a high-energy number that might call to mind Boston or other more mainstream 70s artists.

Clearly, for Americans it requires an adventurous spirit, a small leap of faith and a bit of cash to dive into the catalog of a little-known German prog band. But 2008 – Live – 2010 is a good place to start.