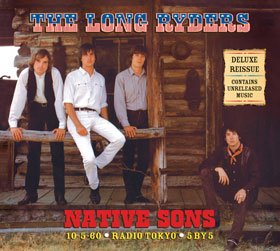 The Long Ryders made a hypocrite out of me. Up until the mid 1980s, I adamantly argued that I didn’t like any music that had so much as a twinge of country to it. But then I heard this band from Hollywood, and I was forced to revise my thinking.

Cast your mind back to the mid-80s. The airwaves – even the hipper end of the dial — were filled with teased-haired, lipstick-smeared acts, artists who placed as much emphasis on their visual aesthetic as they did on (shudder) the music. College radio was the bright spot in this milieu, and on stations like WRAS (Georgia State University’s high-powered station broadcasting from downtown Atlanta) and WREK (neighboring Georgia Tech’s “diversified” station), one could hear more interesting, challenging and – ultimately – enduring sounds.

Even within that context, the Long Ryders were something of an anomaly. Springing as they did from the Paisley Underground scene of Los Angeles, the Ryders cast a wider net to harvest their inspiration. Clearly influenced by the “if you can’t say it in three minutes, it ain’t worth saying” aesthetic of sixties pop/rock, the foursome also appreciated the windswept, proto-Americana style of The Byrds. The Long Ryders’ jangle was heartfelt, and – to coin a phrase – modestly anthemic.

By that I mean that the Long Ryders’ lyrics beckoned and appealed to Everyman, but did so in a way that didn’t call attention to itself; no “hey, I’m singing an anthem over here, fergodssake” attitude. Highly accessible and hooky melodies with a near-perfect blend of country and rock, the songs of the Long Ryders formed an irresistible body of work. Across three albums and an EP, the group melded a country sound with a rock attitude, creating something that – in contrast to innumerable watered-down and artistically vapid attempts by other artists (Eagles, I’m looking at you) actually worked.

I didn’t discover the group until midway through their relatively brief time together. When 1985’s State of Our Union came out, I was hooked. The band’s songs – written individually or in band-member combinations – showed an interesting and subtly political (populist) worldview.

But before that stellar record, the group released their 1983 debut EP 10-5-60 and their first full-length (1984’s Native Sons). Those records showed the group’s approach blossoming fully formed. Nearly thirty years later, it’s been reissued on CD along with Native Sons and a handful of other tracks (demos, sessions and a b-side). Save for a bit of shotgun-snare sound, these form two dozen tracks of timeless rock’n’roll. Lyrically, the group always had a knack for painting a personal picture yet somehow opening it up to the universal; even the titles (example: “Never Got to Meet the Mom”) make it clear that, as J.C. Fogerty might have said, the Long Ryders wrote a song for everyone.

The highlights on this expanded reissue are far too numerous to mention. The twangy stomper “Wreck of the 809” combines London Calling-era Clash style with an American storytelling approach. Countless groups of the era – Tom Petty and the Heartbreakers, REM, The Bangles — employed shimmering Rickenbackers to craft their sound, but the Long Ryders were the most successful at bringing the punchy rock approach to bear along with the Rics. And John Mackey’s new liner notes – displaying a love for and understanding of what the band was all about — are among the best I’ve read in ages.

There’s not a duff tune in the bunch on this deluxe reissue; even the demo tracks are worthwhile. While the Long Ryders didn’t burn up the charts in the 80s, the music they created has withstood the test of time. To call these songs timeless is not to overstate the case; songs like “And She Rides” sound as fresh today as they did back in 1984. Essential.