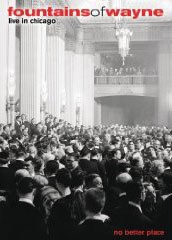 With the August 2011 release of Fountains of Wayne‘s new album Sky Full of Holes, now is as good a time as any to look back at their previous release, a live-in-Chicago concert DVD.

No Better Place: Live in Chicago is a concert film, pure and simple. Just the band in street clothes, playing their songs. Filmed onstage in a small venue (seating a few hundred at most) with a vast stage and fancy lighting, the stage is decorated with banks of TV monitors. The whole stage set is more akin to a TV show appearance than a concert.

The video shows Fountains of Wayne covering their hits and some then-new tunes in a show from October 2005. The group’s trademark songs of mundane jobs, typical towns and universal concerns are all delivered with just the right balance of wit and wistfulness. The Fountains of Wayne worldview is this: look at life through gimlet eyes, and respond with a resigned shrug.

The songs sound just like the album versions. But there are a few odd things about the set. One, the show was filmed in 2005 (around the release of the 2CD compilation Out of State Plates) but not released until 2009. Two, the keyboard player (Steven Gold) is all but hidden onstage, even though keyboards form a critical component of many FoW songs. On the liner notes, Gold’s name is preceded by an “and,” suggesting he’s not an official member of the band. As for the presentation, even though Fountains of Wayne is known to be the project of Chris Collingwood and bassist Adam Schlesinger, onstage it’s clearly Collingwood’s show.

The songs are great tunes in the trademark FoW powerpop vein; the set kicks off with “I’ve got a Flair,” and the band cleverly inserts a quick excerpt of the second half of Derek and the Dominoes‘ “Layla” to good effect. The group is known for smart turns of phrase, like this one from “Sick Day”: “lead us not into Penn Station.” If you react with a little half-smile at reading that, you are probably already a Fountains of Wayne fan. If not, go become one. Those kinds of lyrics are a key component of the Fountains of Wayne charm.

When the group plays their hit “Stacy’s Mom,” not having the Rachel Hunter video playing lets the listener concentrate on the song itself; here it’s even more obvious that the song is a loving piss-take on the style of 80s stalwarts the Cars. Taken as a whole, the 16-song concert is a good overview of the FoW catalog. But longtime fans will be able to list a half dozen should-have-been-there songs.

The bonus footage is an acoustic live-in-the-studio run-through from late 2008, featuring Collingwood and Jody Porter on acoustic guitars, and Adam Schlesinger on a rich-sounding Baldwin grand piano. The six songs are all enjoyable, but the clear highlight is “It Must Be Summer.” The acoustic arrangement brings out the song’s subtlety.