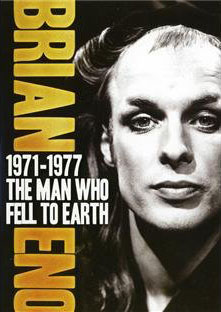 First, the bad news. The people who put out this new critical analysis/history DVD obviously spent no more than a few seconds thinking up a title. What they came up with – Brian Eno 1971-1977: The Man Who Fell to Earth – makes little sense, calls to mind a project Eno had nothing to do with, and betrays (at worst) indifference and (at best) laziness.

The good news, however, is that that’s all of the bad news. Another in the series of similarly-approached DVDs from the Sexy Intellectual people, Brian Eno 1971-1977 (yeah, that’s what we’ll call it) takes a thoughtful, thorough an intelligent look at the work of this innovative, singular and influential artist.

Eno was a major component of a number of important projects during the period discussed. The first two Roxy Music albums; a pair of records with Robert Fripp; collaborations with Cluster, Phil Manzanera’s 801, his work with David Bowie; his spearheading of the Obscure project; a one-off concert with Kevin Ayers, Nico and John Cale. Even the least worthy among these is essential.

Oh, yes: and his own albums during the period. Beginning with Here Come the Warm Jets (1973) and carrying forward with Taking Tiger Mountain (By Strategy) (1974), Another Green World (1975) and Before and After Science (1977), this self-described “non-musician” charted new musical territory, and produced works of lasting value. His Discreet Music (1975) was the most high-profile of the Obscure releases, and pointed the way toward his future work.

Happily, Brian Eno 1971-1977 addresses all of the above, from both a historical and critical/musicological point of view. Employing Sexy Intellectual’s now-standard approach, the DVD relies mostly upon musicians, theoreticians and critics, with the narrator moving the story along. There are even a few (well, two, if I recall) brief archical interview excerpts with the man himself.

There are copious visuals throughout the film, including that legendary Roxy Music clip from German TV; if you’ve seen it it once, you’ll remember it: Eno’s wearing a feathered jumpsuit whilst playing a Minimoog. Collaborators are also called upon to give their take on Eno; the most interesting of these is Brian Turrington, bassist for the Winkies, the group Eno enlisted for his abortive live tour to promote Here Come the Warm Jets. Percy Jones‘ reminiscences are fascinating as well; it’s a minor shame his Brand X bandmate Phil Collins couldn’t have weighed in on his experiences with Eno. One thing that comes through in all of the collaborators’ interviews: Eno is, by all accounts, a very pleasant guy to work with. How many significant artists can you say that about?

Among the more highbrow commentators, author Geeta Dayal is the most interesting and engaging (and the most down-to-earth, frankly). It’s easy to get all high-minded when it’s Eno’s work that one is speaking of, but as Brain Eno 1971-1977 makes clear, the man actually has a deeply humanistic streak, with plenty of humor to boot.

If you’ve forgotten how beautiful a work Another Green World is, the DVD will almost certainly send you scurrying back to the Eno section of your LP collection. If you’re not familiar with Eno’s work – or if you know him as that odd guy who worked with U2 and Talking Heads – this DVD is a great way to learn what exactly it was that those artists saw in him. Even with its long runtime – two and a half hours plus some brief and interesting 801-centric bonus materials – Brian Eno: 1971-1977 is highly recommended.