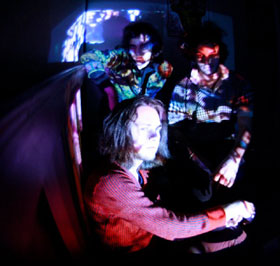 If your idea of a good time is tinny, fuzz-drenched garage rock in the vein of Sky Saxon and the Seeds, I’ve got a hell of a find for you. Sure, you’ll want to hold onto your old Electric Prunes LPs, but a new release – the self-titled album from Night Beats – can sit proudly alongside those garage psych nuggets of yesteryear. Hell, even the CD sleeve looks like an LP sleeve.

Hopelessly reverbed guitars are the order of the day here. Sneering vocals and a production aesthetic only a few notches above demo-quality are what you’ll find. The yelping, edge-of-dementia vocal on tracks like “Ain’t Dumbo” call to mind what Marc Bolan might have sounded like were he playing with bandmates in a garage in, say, Elgin, Illinois.

Night Beats have nailed the garage aesthetic: for all I know, they’re the tightest, most expert players on the globe. Yet somehow I doubt it. And frankly, if they were, the songs on this album would probably be less wonderful. There’s a white-guys-not-quite-getting-the-blues vibe on “Dial 666,” and it’s note-perfect: just like the Seeds tried to pull off on A Full Spoon of Seedy Blues. On “The Other Side,” they attempt what every self-respecting garage band tried in ’66: rewriting The Ventures‘ “Walk, Don’t Run.” They succeed as well as any of those guys born in 1950 did, that’s for sure. They do depart from the mid-sixties approach just a bit: the song runs seven minutes, heading into some deeply electrified proto-Blue Cheer territory toward the end. But a wailing harmonica keeps the garage vibe happening.

At its core, rock and roll is a derivative genre, so no points shall be deducted from Night Beats for conjuring up the ghosts of old. They do what they do with no discernible sense of irony, no in-it-for-the-laughs attitude. To paraphrase Mr. Lydon, they mean it, man.

There’s an ever-so-slight country stomp feel to “Useless Game,” but it’s country filtered through the garage mindset. The band careens through the song, threatening to fall apart at any moment. They never do crash, but the net effect suggests a delightfully 60s version of The Replacements. Some manic (and chaotic) lead guitar smacks (heh) of the Velvet Underground.

Talk about truth in labeling: with a title like “Dewayne’s Drone,” it’s got to be psych. And it is. Imagine a savant version of Ringo‘s drumming on “Tomorrow Never Knows” and you’ll have a sense of this song’s underpinning. The brief “Hallucinojenny” is aptly titled as well: squalls of distorted electric guitar are piled atop a boxy drum figure. It almost swings, the way that MC5 would swing. Maybe swagger is a better word.

“Ain’t a Ghost” is structured around the most elementary and insistent of drum patterns. It’s aggressive and noisy, which makes “Meet Mr. Fork” seem like a musical left turn. With its shimmering almost-in-tune jangly guitars and tambourine to propel it along, the song is the closest Night Beats come to pop a la The Byrds. There are even some (shudder!) vocal harmonies.

The opening lead guitar lick on “War Games” has a thick layer of hiss. Anywhere else this would be a problem. In the context of Night Beats, it works. The song has a vaguely “Paint It, Black” vibe. A lovely sub-raga solo and wailing, wordless vocal carries the second half of the track. The band slows things down on “High Noon Blues,” and the result is a sort of cross between 60s garage and Kerosene Hat-era Cracker.

The band is all-in for the closer “Little War in the Midwest.” Nothing musically new is on offer, but the track distills and restates the approach the preceding eleven songs have laid out. Screeches and wails, a vocal approach you’ll either love or have given up on by now; drumming that’s only slightly faster than a plod yet somehow aggressive; and impossibly atonal guitar sounds that suggest what Plastic Ono Band sounded like in Toronto after they left the stage. The second half of the track features combo organ, snare drum and backwards-masked vocal mutterings. Fun stuff.

Night Beats stay inside their particular bag for the whole of the record. If I overdubbed some surface noise and crackle, I could play you this disc and sell it to you as a lost nugget from forty-five years ago. In its own way, Night Beats is every bit as authentic a relic as (I thought) Spur of the Moments was. If you’re in the mood for some time travel, Night Beats can certainly take you there.