Known primarily — when he’s known at all – as a studio rat, R. Stevie Moore has more than 400 albums to his credit. No, that’s not a typo: this underground sensation has recorded and released literally hundreds of albums – first on cassette, and then later on CDR — since 1966. Stevie takes issue with the term album, preferring to characterize his releases as “diaries of sound.” Nearly always working alone, Moore writes, records, plays and sings everything on his albums. Long before the term DIY was coined as an aesthetic for musicians, Moore crafted his endearingly oddball albums, releasing them through mail order (and later, via digital means as well). It’s no overstatement to call him the Father (or Grandfather) of DIY.

Working loosely in the pop idiom, Moore possesses a strong sense of melody; he knows how to insert hooks into his songs. But Stevie filters those songs through a skewed sensibility that ensures his sales figures won’t ever compete with those of Justin Bieber. He’s weird, but not inaccessible. No Jandek or Residents is he; at least not usually. A handful of his albums have seen mainstream release, including 1976’s Phonography, and a pair of best-of collections (2008’s Meet the R. Stevie Moore and 2009’s Me Too). But none of his songs has ever troubled the pop charts. 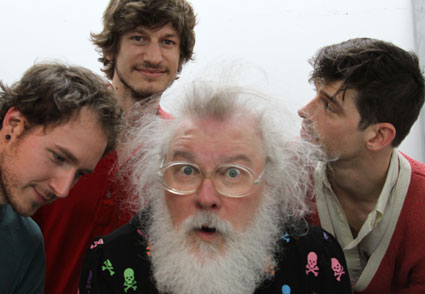 Moore recently left his home of thirty-plus years in New Jersey, and returned to his hometown of Nashville TN. Concurrent with – but unconnected to — that change, filmmaking student and friend Jon Demiglio approached Moore about making a documentary about the musician. One thing led to another, and New York-based Demiglio rounded up some friends and put a band together to back Moore on some live dates. Next thing they knew, they had mounted a tour, Moore’s first. “It just fell into place,” Moore says. “I didn’t seek it out.”

In 2010 Moore – via website and social media — invited fans and friends to record covers of songs from his vast catalog, planning to compile them onto a self-tribute album. The blog-based project blossomed into an eight-volume set titled Copy Me. The set includes RSM songs reinterpreted by some of his most ardent fans. That list includes Dave Gregory (XTC); Ariel Pink’s Haunted Grafitti; pop auteurs Jason Falkner and Eric Matthews; Jad Fair (Half Japanese); James Richardson (MGMT); and Penn Jillette (Penn & Teller), plus dozens of (far) lesser-known names.

“The irony is that my name has been bubbling under in the underground for decades,” Moore observes, “and now it’s shot through the roof.” In a recent New York Times interview, up-and-coming rapper/singer Theophilus London compared Moore to Brian Wilson, calling Stevie “one of my favorite writers…a genius.” For his part, London’s interviewer called Moore “this New Jersey low-fi cult musician.” They’re both right.

When Stevie landed back in Nashville, he got together with another friend and began work on (yet) another album, to be titled Advanced. Using the popular Kickstarter funding platform, Moore set out to cover the album’s recording and production costs.

Like Moore’s recording efforts, he stresses that the tour is “totally DIY. I have no booking agent, or management, or anything.” Moore met up with his new band in NYC in April, and the tour began in earnest. They’ve secured some festival shows and just lined up a tour of Europe. “The sky’s the limit,” gushes the 59-year-old Moore. Surprisingly for someone who’s made a career out of working by himself in a home studio, Moore admits that he “really like[s] living out of a suitcase.”

The band is a study in contrasts. While bassist Moore — the son of famed Nashville session bassist Bob Moore – is a longtime veteran musician proficient on all manner of instruments, he describes his three bandmates as “less than half my age.” But he insists their musical approach is “like any young band. I’m the band leader, but I’m very generous with spontaneity, whatever they feel like doing.”

“I’m a wild man onstage,” claims Moore, and there are ample YouTube clips online to prove him right. “I’m shredding my vocals more than I ever intended to, but that’s what comes out.” While the set does include a few ballads, Moore says the show “leans toward hard rock. Like my records, the show is as diverse as possible.” He adds that he often wears women’s clothes (“plus size,” he laughs) onstage. Following his winning album approach, Moore says that the show always includes “spoken word, absurdities, dada” between songs. Calling himself a “Master of Ceremonies,” Moore asserts that he wants to give “entertainment value. I don’t want to be some shoegaze band.”

But with such a massive back catalog, how does Moore pick those songs for an evening’s entertainment? “It’s all the hits,” he says, without a trace of irony.