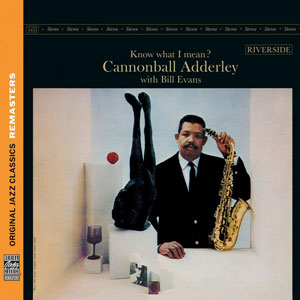 As I’ve confessed elsewhere on this blog, by most reasonable standards I’m a jazz newbie. Yes, I did buy Weather Report’s Heavy Weather LP when I was in high school. And it’s true that in my early college days I was the recipient of some handed-down Chick Corea jazz improvisation LP (though at the time I hated it). I’ve pretty much always been a rock guy.

It way well be that the work of Cannonball Adderley is not the most common of entry points into modern jazz, but it was mine. Sometime in the mid 1990s I picked up a copy of the 1958 Blue Note LP Somethin’ Else for a buck at a neighborhood garage sale. It was cheap, and in good condition, so I figured, why not.

As you may have guessed, I fell in love with that record. The things that Adderley and his band (including, among others, Art Blakey, Miles Davis and Adderley’s brother Nat) did with those songs simply amazed me. The reinvention of standards like “Autumn Leaves” was revelatory, and there was so much to absorb that I could listen again and again, finding new joys in each successive listen. Nearly twenty years after that (for me) momentous chance purchase, I still count that LP as one of my favorites.

My discovery of jazz pianist Bill Evans is a far more recent event. In late 2010 I received a review copy of the Bill Evans Trio album Waltz for Debby, and it had a similar effect upon me. So it was with some great joy that I found my mailbox recently contained a Concord expanded reissue on CD of the 1961 album Know What I Mean? credited to Cannonball Adderley with Bill Evans.

It’s everything I could have expected, and more. The disc opens up with another reading of Evans’ “Waltz for Debby” (he recorded several versions: all unique, all worthwhile). Even though I play piano myself, I would never claim to understand more than a fraction of what Evans does with the instrument.

There’s a book currently on my nightstand. You see, there’s this local bookstore – I won’t say where, lest you shop there and ruin things for me – and in their music section they never fail to turn up some interesting used titles at bargain prices. It was there that I scored a softcover edition of How My Heart Sings, Peter Pettinger’s excellent (if dense) biography of Evans. Pettinger explains — to the extent anyone can – how Evans colored his tone through the way he sat at the piano, the amount of tension in his body (especially his forearms). Like the music itself, I don’t quite “get” a lot of it, but the feeling — the gist – comes through loud and clear.

And so it is with the songs on Know What I Mean? None of the players is content to act as backing musician, and as such the album is an exemplar of what (I believe) Evans termed “simultaneous improvisation.” The amazing thing is that it all works.

And it’s all delivered in crystal-clear stereo sound, no small feat for 1961. Riverside honcho Orrin Keepnews was a master at capturing the live tonalities of acoustic instruments in the studio, and Know What I Mean? has that trademark you-are-there vibe throughout.

Know What I Mean? is certainly Cannonball’s show — he gets the share of solos one would expect on an LP bearing his name – but there’s plenty going on – much of it quite subtle – elsewhere within the songs. The instinctive give-and-take of the players is breathtaking. Evans’ light touch on “Goodbye” is contrasted by Adderley’s alto sax; the latter is considerably louder in the mix, and like everything else on this album, we can safely assume that is no accident. When Adderley starts a solo, the listener is goosed out of any piano-induced reverie he or she might be enjoying.

As is standard on Concord Original Jazz Classics Remasters, both the original and contemporary liner notes are part of the package. The 1961 liners make a reference that – a half century later – is unintentionally amusing. The swinging bop of “Who Cares” is characterized by Joe Goldberg as “the most overt rocker of the set.” As The Princess Bride’s Inigo Montoya once said, “You keep using that word. I do not think it means what you think it means.” No matter; it’s a great track.

Three bonus tracks are included; all are alternate takes of song that ended up on the official LP, but a later take of the title track goes on a full two minutes longer than the official version. Take 8 of “Toy” is previously unreleased.

The word effortless comes to mind while listening to Know What I Mean? The performances seem so natural, full of nuance but never forced, never studied. Part of that quality is certainly down to the players’ familiarity with one another: Adderley and Evans played together with Miles. The choice of material goes a long way toward achieving that effect, as well. In addition to Evans’ signature tune, songs by Gordon Jenkins and the Gershwins – plus the Sinatra-popularized “Nancy (With the Laughing Face)” ensure that time and effort can be spent on improvisation, rather than rote playing.

And of course when it comes to these players, that’s exactly what’s to be expected. Know what I mean?