In fall 2010 fall the film documentary Who Is Harry Nilsson (And Why is Everybody Talkin’ About Him)? premiered in selected cities. The film came out on DVD around the holidays, with a great deal of bonus material added. I got a chance to have a wide-ranging conversation with John Scheinfeld, the writer/director of the film. Here’s Part One.

Bill Kopp: What initially attracted you to Harry Nilsson’s story?

John Scheinfeld: A few years ago, Lee Blackman, the attorney for Harry’s estate had seen some of my work. He wondered if I’d be interested in doing a documentary. I said, “Well, I know the music, but I don’t really know a lot about his life.” So I went off and did some research. And the more I read about this guy, it struck me that he was an extraordinarily gifted artist…and an extraordinarily complex human being. And to me those elements are the basic for a great film. So I said, “I’ve got to do this.”

It took awhile to get the money together; Lee did that, and he’s the Executive Producer on the film. And then we got started. So it was a combination of loving the music and finding it a very compelling story. 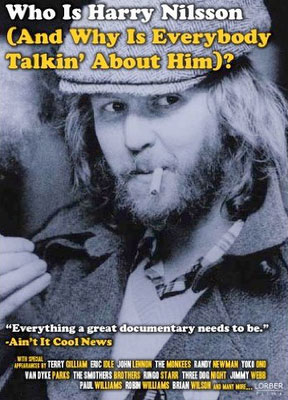 BK: The film features plenty of reminiscences from people who knew and loved Harry. Besides Lee Blackman, were there any of these people who were especially instrumental in helping to get this project off the ground?

JS: The creative concept here was to only talk to people that knew Harry. People who knew him intimately, who were there. People who saw things, experienced things, so that they could speak to his life and career with credibility and legitimacy. I didn’t want to talk to a rock journalist, or a writer, or historian, or cultural commentator. So, once we had the funding, we started to schedule interviews with people.

Whenever I do a film and decide who to interview, I treat it like casting. I want to have a broad range of people, an interesting range of people. I want people who have something to say, so that viewers will, hopefully, be captivated by what they’re talking about. And because this was the first film documentary done about Harry — because the people in his world weren’t receiving requests every couple of weeks to talk about Harry – they were just thrilled to talk about him. So in some ways this was one of the easier booking projects that I’ve had. People loved him so much, they were just thrilled to talk about him.

BK: That’s interesting. I suspect that if you’re talking to someone about a more well-known or well-covered figure, the people might already have ready answers for questions. They would have thought about it and crafted responses. In those situations, as genuine as they might want to be, their answers would be a little bit canned, a little glib.

JS: There was a spontaneous aspect to their responses. And I do my job as a filmmaker – I do my own interviews – to create an environment in which they feel comfortable talking. I don’t mean [dishing] dirt or anything; just an environment where they feel comfortable opening up. And with all of these people, it was easy. Because they had lots to say.

One of the things that struck me was just how much these people loved him. They loved him for what he was; they loved him in spite of the craziness and the self-destructiveness and all of the other things. What they saw in him was a sweet, generous, kind, good friend. And I think that one of the things that I set out to do here was to make a very nuanced, very richly-textured portrait of an artist.

As you see in the film, we don’t run away from the dark side. But nor do we unduly dwell on it. We wanted to show the whole human being. The best compliment I received on this film was from Una Nilsson, his widow. She said to me, “You got him. That’s the Harry I knew.” And presenting the memories of all of these people helped us to do that.

I think also, because of their affection for him, and the way in which they spoke about Harry, it was very emotional. And I think that communicates to the audience.

BK: It was a more human story than (as a documentary viewer) I’m used to seeing. Sure, there were aspects of his personality that were, so to speak, larger than life. But it was a human-scale story.

JS: That very much was my goal. When you have such great people as we had – everyone from Micky Dolenz, who’s so funny, to Jimmy Webb, who’s extraordinarily articulate, to Robin Williams and Brian Wilson, two of the Monty Pythons (Eric Idle and Terry Gilliam), Yoko Ono — all of these people, because they’re all so articulate and so expressive, it gave us so much to work with.

BK: This just occurred to me. In some ways, who he gravitated to as friends…that says something about a person. If you read the list of interviewees, even if you somehow knew who all those people were and didn’t know about Harry, you might say, “Gosh, I’m interested in this guy already.” He couldn’t help but be interesting.

JS: I think that’s right. Looking at it from my own perspective, one of the ways Harry first got on my radar was because he mattered to people who mattered to me. I was and am a huge fan of the Beatles. And the fact that they paid attention to this guy, that they pronounced to the world that this is an artist worth noticing…

BK: Yes, he was their “favorite group…”

JS: …So I wondered, what was it about Harry as an artist, and as a man, that appealed to these guys? That, to me, was fascinating. And it is part of what we explore in the film.

BK: Did you have the whole thing carefully storyboarded out ahead of time and then you followed that? Or did some parts expand and contract once you started putting them together? What I mean is, were there instances where you sort of though, “Okay, two minutes here on this topic,” and then once you got an interview going, you decided, “This needs more (or less) coverage”?

JS: That’s a really good question, and it speaks to the process of documentary filmmaking. You get a guy like Michael Moore; from my point of view, he decides what he’s going to do, he has an agenda, and he bends everything that he does to support that agenda.

From my standpoint, I don’t start out like that. I know what the general arc of the story is, but the first thing I do is schedule the interviews. I do my research, and I come up with my questions. We talk, and then you see what you get in the interviews. And this is what speaks to my process. I’m all about: Where does the truth lead me? Not: what’s my agenda, what do I think happened.

So once all or most of the interviews are done – and in this case we interviewed something like thirty people – there I sit down and say: what do I have from all of them? I go through all of the transcripts, and I highlight all of the sound bites that interest me to use in the film. Then I put a script together.

And what I mean by a script is not just what a narrator might say. In this film we didn’t have a narrator. By script I mean how we lay out the story. The story arcs, the character arcs, what scene follows what scene…that’s what writing the script is. Then we get to see what moments would be good cinematically.

You see part of that process on the DVD; we wanted to give some real value to people who buy the DVD. Always, in the process of making a film, you’ll start sequences, and for one reason or another – sometimes for time, sometimes because you don’t have all the photographs or film you’d need to illustrate a particular story – you end up abandoning some of those. What we were able to do here was go back and finish them up. And that became the bonus material. We have ninety-plus minutes of bonus material on the DVD; almost like another movie’s worth.

That, too, is part of the process. There was a sequence that killed me to cut, because it’s really funny and interesting. Harry made a career without ever getting onstage to perform a concert. And yet Terry Gilliam and Eric Idle told me a story of a time Harry did get onstage, with them. With Monty Python in New York in 1976. And what happened is such a “Harry” story.  It pained me to trim it out of the actual film, but now we have a chance to show that sequence.