Album Review: Chris Difford – Cashmere if You Can 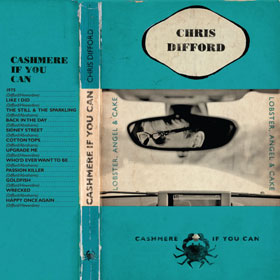 While there is no evidence and not a single reason to think it true, Cashmere if You Can from former Squeeze co-frontman Chris Difford feels like a songwriter’s look back near the end of his life. The songs – all cowritten by Difford with either Boo Hewerdine or Leo Abrahams – all deal in one way or another — sometimes directly, other times obliquely — with life from the perspective of someone who’s lived it.

There are looks back at wasted and/or misspent youth, like “1975” and “Wrecked,” but even when Difford sings about his formerly wicked ways, he does so with a smile. It’s the smile of someone who’s lived to tell the tale. The music is upbeat when it needs to be, as in “Like I Did,” which observes, “It’s funny how your kids turn into you.” When Difford sings of the wheels turning a few degrees, it’s difficult to avoid thinking of another album that took a look at adult life: Double Fantasy. Of course there’s no musical Yoko Ono to Chris’ John Lennon here (that would be Glenn Tilbrook, one guesses), but with tunes as sturdy as these, Difford needs no foil.

The arrangements are intimate and expansive at once; the instrumentation is straightforward yet playfully inventive. But the showcase here is Difford’s singing of his lyrics. The shimmering “The Still & the Sparkling” is a gem among many. “Back in the Day” is a Brit-country shuffle with hints of Aztec Camera, and yet another winning lyric. On “Sidney Street” Difford and his players strike a musical pose quite similar to The Milk & Honey Band, wedding it to a heartfelt lyric about Difford’s dad going to war (and, thankfully, coming back).

Difford rocks it out and revives his trademark gravelly vocal delivery for “Cottontops.” A Duane Eddy buzzy twang is coupled with a subtle Merseybeat feel, a bit of psychedelic guitar and some modern grunge; he hits all the good points on this one. “Upgrade Me” mines a Parisian vibe (Difford currently resides in the City of Light, so he comes by the sound honestly).

Disco-funk of a decidedly Flight of the Conchords bent is the chosen style on “Passion Killer.” This song tackles a situation familiar to couples of a certain age: finding “adult time” in a house populated with younger ones. It’s clever songwriting in the very best sense of that term.

A couple of lyrical themes crop up over and over on Cashmere If You Can; more than a couple of times Difford worries about being ignored. Do him — and yourself — a favor and do not ignore this record. Cashmere if You Can is pop music for adults. If you’re one of those, get one of these.