Album Review: Dave Rave – Live With What You Know 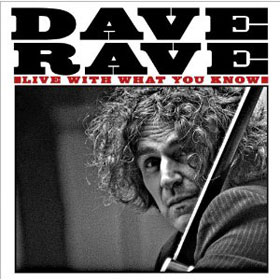 Some albums aren’t very immediate. That is, they require the listener to spend some quality time with them, revealing their charms over repeated listening. Other records — and this is a much rarer occurrence – grab the listener’s heart, or ear, or other appendage. Live With What You Know from Dave Rave plants itself firmly in the latter category.

I’m a pushover for the jangle. So when I was going through my periodical smash-or-trash exercise to decide which of the many CDs on my desk would go in the to-be-reviewed pile, it took literally seconds for me to shout (yes, literally shout) “Yes!” to Live With What You Know. From the opening crash of chords to the Ringo-styled drum fill to the opening lyric (“Hey!”) I knew I had found a winner.

And it only got better from there. Employing the proven songwriting philosophy of Raspberries-era Eric Carmen (also known as “don’t bore us, get to the chorus”), the chiming, infectious “Anne-Marie” tells the listener some (but not all) of what they need to know about this disc. Joy and exuberance of love, channeled through electric instruments: that’s what’s on full display here. There’s an innocence in a lyric like “I want you over for tea,” but Dave Rave delivers it in a way that’s neither fey nor ironic.

The album isn’t one big powerpop extravaganza, however; there’s depth and variety here. A folky approach imbues many of the tracks with a vulnerability – both musical and lyrical – that allows the record to connect with the listener on many levels. “You’re Goin’ to London” has an edge-of-heartbreak vibe reminiscent of Big Star’s “Thirteen.” The piano-based “One of a Kind” approaches anthemic territory; while it’s firmly rooted in classic pop, it calls to mind more modern acts like Semisonic. Rave (nee DesRosches) has a melancholy voice that conveys emotion, and throughout Live With What You Know that voice seems right on the edge of cracking. And that suits the songs perfectly.

The set bounces between solo acoustic numbers like “One Day Your Sun Will Shine,” the Nick Lowe-meets-We Five stomp of “Rain Song” (with some lovely guitar dialogue) and “Streets of Liverpool.” Not surprisingly, the last of those conjures Merseybeat, with swooning echoes of Dave Clark Five’s “Because,” and the The La’s “There She Goes.” It’s a touching, heartfelt mash note to that city on the Mersey.

“Silverline” is another thing entirely. With a country rock vibe (British variant, though Rave is Canadian) that recalls Brinsley Schwarz, the track features Kate MacDonald on lead vocal instead of Rave. The song sounds like something the late, great Kirsty MacColl would have been proud to put her name on. “Siren Song #2” shows that Rave can craft songs in whatever style he chooses; here it’s soaring rock with a Neil Young flavor. On “Try to Get Along” it’s back to a plaintive White Album style.

The whispering, melodramatic “Strong” is the most unusual song on Live With What You Know. Built mostly around an acoustic piano and cello, the song is a lump-in-the-throat excursion featuring a vocal from Rave that’s alternately spoken and sung. It requires close attention, and rewards the effort. A tour-de-force.

“Station Road” distills CSN&Y though a Led Zeppelin III filter and in the process creates something warmer and friendlier than either. “The Gardener Knows” extols the simple joys of – among other pleasures – sharing a meal with a loved one. “Rows and Rows” starts simply, in unadorned fashion with Rave and his acoustic guitar, and unfolds gradually, adding more and more guitars, piano and more, highlighting the contributions of frequent Rave collaborator (and renowned music journalist) Gary Pig Gold.

And then – fourteen tracks in, much later than any listener would have any right to expect – we get “All of the Love You Can Handle.” A nearly perfect song in the classic powerpop mold, it’s got it all: hooks, soaring melody, na-na-na outro, stop-on-a-dime end, you name it. There’s eve a spot in the arrangement that would be perfect for Rave to shout, “Thanks for coming out tonight!” Though he doesn’t. It’s four minutes of bliss.

“Gonna Find You One Fine Day” is back into heartbreak territory. The song drips with regret and resignation, and includes the lyric that gives the album its title. Up-front drumming, lovely piano and some mean glockenspiel are among its highlights.

Though it’s a slightly odd choice for an album closer, the vaguely reggae-inflected “Strawberry Wine” is charming in its own way. Sounding more like Lindsey Buckingham’s work with Fleetwood Mac, it’s a bit out of character for Live With What You Know, but makes the point – which scarcely needs making – that Dave Rave is one talented guy.

Live with What You Know is short-listed as one of my favorite albums of 2011.